Photo Feature: A Walk Around the Tables

By Aaron Forsythe and Craig Gibson

You've seen plenty of pictures of smiling faces, sinister scowls, and detached shrugs of the hundreds of players here in Charleston throughout our fine coverage, but the real action here is on the tabletops. Photographer Craig Gibson and I took a stroll around the grounds today to get a look at some of the cards, combos, and confusing game states players were dealing with today. 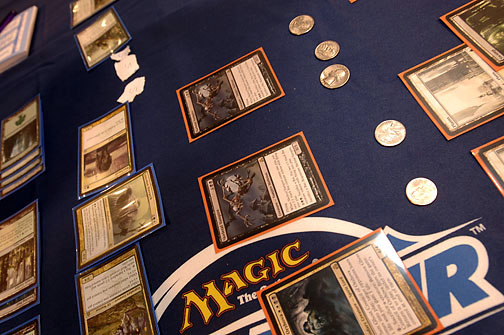 In a Feature Match between Jon Sonne and Mike Flores, Tolsimir Wolfblood led his Selesnya army into battle against the Ghost Council and the undead horde of the Orzhov. Use your imagination… those are more than just slips of paper and coins out there… those are slithering Saprolings and bloodthirsty Bats! 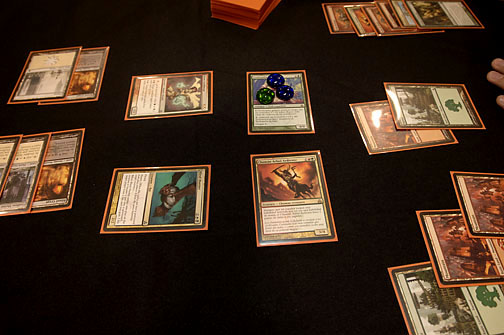 Hiding under those glass beads is none other than our old friend Golgari Grave-Troll. The six-mana dredger is out of place in two ways - as a Golgari card in an otherwise Gruul deck, and as an Extended engine card in a block beatdown deck. 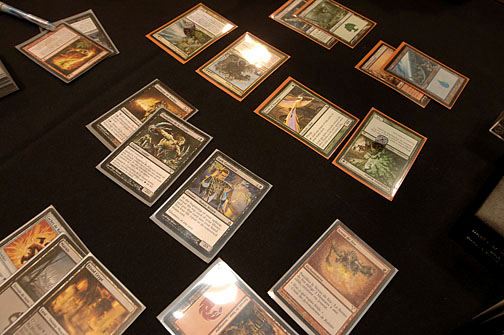 It seems that Bob Maher (Dark Confidant) has chosen a guild to call home in this event, and it isn't the Orzhov pictured in his card art. No, The Great One has been press-ganged into the Cult of Rakdos alongside the Crypt Champion and the ghoulish Rakdos Guildmage. 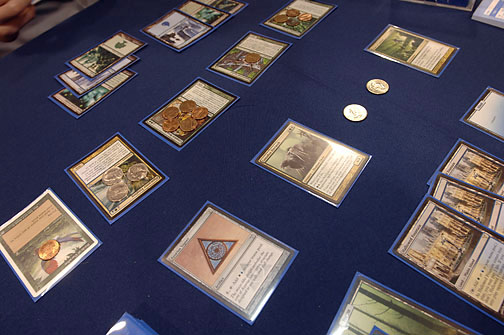 When is 31 cents greater than 50 cents? When the two quarters represent mere 1/1 Saprolings and the scads of pennies and nickels indicate the size and flexibility of the Simic's graft mechanic. This tournament really puts a strain on one's change purse! 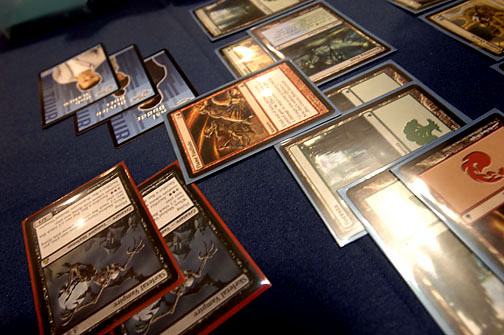 Of course, Pro Player cards remain popular choices for tokens. In this frame, Bats that look suspiciously like Kai Budde, Olivier Ruel, and Bob Maher brace themselves for a fiery death to a Flame Fusillade. 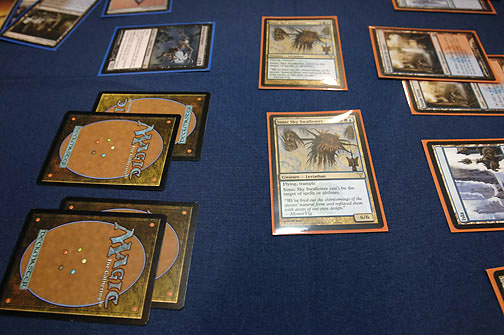 The battle for the skies is waged thusly, ad infinitum. Hundreds of Simic Sky Swallowers and Skeletal Vampires have owned the late-game stages of this event. If your deck wasn't built to either include or handle these format-defining bombs, you probably are playing in side events by now. 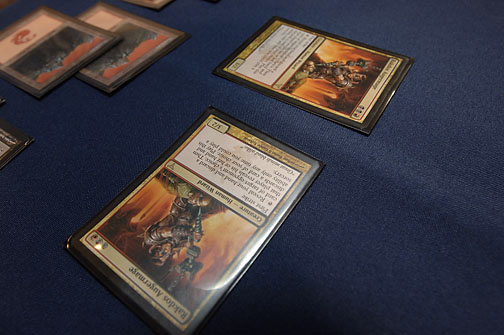 Winning an Invitational doesn't make you a legend, at least not literally. Most Rakdos decks pack the maximum number of Terry Soh's card, Rakdos Augermage, a great combination of disruption and attacking power. The card's artists, Zoltan Boros and Gabor Szikszai, are here at the event signing copies and prints as well. 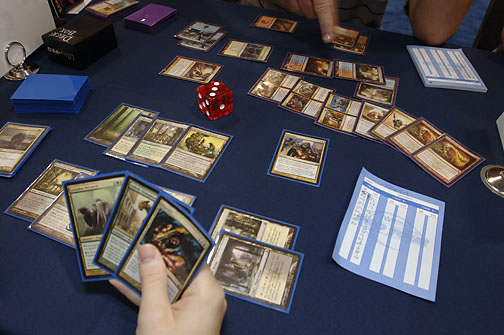 Here's a nightmare: You think you have a pretty good hand - a couple nice 4/4's, a little removal - and then you play Castigate. You opponent reveals Odds/Ends x2, Hide/Seek, Condemn, Lightning Helix, and Demonfire x2. Good luck! 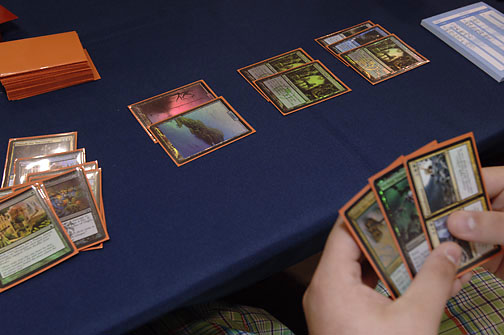 This fellow's deck is packed full of foil rares, foil dual lands, foil Unhinged lands, you name it. The glare blinds opponents, and the ostentation of the deck stupefies them. Estimated secondary market value: $1 billion. 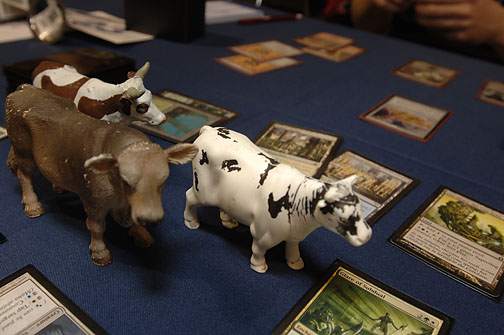 Coins? For amateurs. Pro Player cards? For losers. You wanna see some real tokens? How about a variety of four-inch plastic cows! The grass must be greener on the Selesnya side.