Play the Game, Learn to Ski

he player rewards program started with players getting given free token creatures based on the number of games they played. Thursday, I found myself sliding down a mountain on two small sticks, with only a couple of sticks for balance, all thanks to Magic. I love this game.

After Pro Tour-Honolulu, with the sun, the sea, the sand, and no doubt some other excellent things beginning with an 'S', Geneva is quite different as the luxury stop on tour this year, but for the fact that it also has something excellent beginning with an 'S'… snow. With Wizards of the Coast laying on a ski trip for players and staff the day before the Pro Tour, there was yet another great example of the 'play the game, see the world' idea in action, where 'seeing the world' doesn't necessarily mean looking at cards in a tournament venue. There were a lot of Snow-Covered Mountains in the Alps, but the only ones I saw don't (as far as I'm aware) tap for mana.

This was my first-ever skiing experience. As exciting as this was, it was also pretty terrifying. I heard a lot of horrifying statistics on injuries skiing, and couldn't help but worry that I might find myself in some sort of cast. I went as far as writing a little affirmation note on my hand 'Note to self: Don't Break Leg'. For the first time in my life I took out health insurance, but couldn't help but think that if I broke my leg, having a pile of money wouldn't really help me climb any stairs.

I just kept reading the note.

Along with quite a lot of the players heading up above the snow line, I was going with the full package of being taught how to ski, starting on the baby slopes, and seeing where that took me - ideally hoping I wouldn't fall off a mountain and end up in Lake Geneva. It was the first time that Paulo Vitor Damo Da Rosa had even seen snow. Now, I've thrown the odd snowball, but in this instance I felt just as if I'd been thrown in the deep end as he probably did. 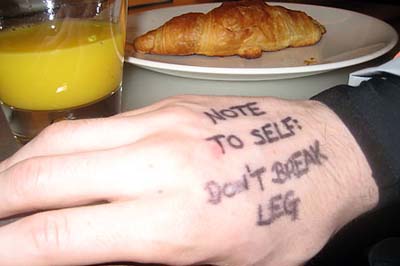 Learning to ski first requires one to learn to walk again. As I don't recall how I learned to walk in the first place, this was a little tricky. Learning to walk up and down slippery hills with sticks attached to one's feet was enough for Randy. He became a drafter. I, on the other hand, am stubborn.

Up in the ski lift I went, and down assorted hills. Skiing has a pretty steep learning curve, but luckily, the curve was very short, so getting over the hump wasn't too tough, and suddenly I felt like I was getting somewhere. There were some tumbles, certainly, but the good thing about blizzard conditions is that falling over really doesn't hurt too much. For those keeping count, I left with the same number of intact legs that I started with, and the adrenaline rush, even on the more pedestrian runs was plenty good enough for me.

The Magic players were in evidence on all slopes as far as I could tell, with Pro Tour hats just about visible under veils of snow. This was a pretty incredible way to start a Pro Tour weekend. I have discovered muscles I never knew I had. This is largely due to the fact that they now ache, but after 6 hours of skiing I really can't complain.

Next year at the Pro Tour, I want to learn to surf!