Play-in Game: Tickets are Punched, but Who's on the Team?Jonathan Sonne vs. Michael Patnik

Neil Reeves and Antonino De Rosa had locked up their national team slots the third position was still up for grabs. Veteran Jon Sonne and his blue Urzatron deck managed to beat Alex Lieberman in the mirror(ish) match in the quarters, but Neil Reeves and his Vedalken Shackles proved to much for Sonne's Urzatron to handle in the semis.

Mike Patnik, one of the "other" guys from the CMU crew, has also been playing for years, but seems to consistently fly just under the radar. Patnik took out fellow under-the-radar dweller Chris Manning and his Green-Black Death Cloud deck in the quarters, thanks in part to Manning's fickle Divining Top, but the humble Sun Droplets in De Rosa's sideboard – and the fact that he drew 700 of them – proved to be insurmountable to Patnik's (not so) tiny white men. 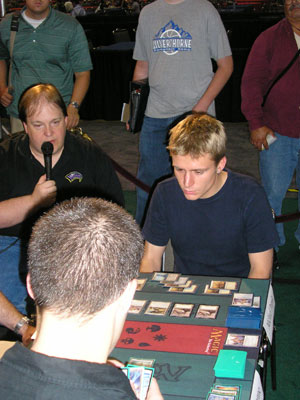 Sonne, foreground, and Patnik were battling for a spot on the U.S. National team.

Facing off against Sonne is a mixed blessing for Patnik. Sonne IS playing blue Urzatron – which Patnik fell to in the semis. But Sonne's version runs no Sun Droplets – the card which inarguably cost Patnik the match against De Rosa.

As Mike and Jon sat down to play, Survivor's "Eye of the Tiger" began blasting across the hall. Patnik perked up a bit and even Sonne seemed to pile a bit faster. The general consensus was that EOTT would favor the aggressive nature of the white deck. After all, which deck can attack with both hands at once? Fortunately for Jon, the music was silenced as they began Game 1, and the field was back to even.

Sonne won the roll and opted to play. Both players kept their initial seven.

Sonne started off with a turn-one Top and a turn-two Urza's Tower and Chrome Mox (imprinting Mana Leak). In an inauspicious beginning, Patnik had no one- or two-drops. On turn three, Sonne dropped a Solemn Simulacrum and fetched a fourth land. Seizing the opportunity, Patnik Raised the Alarm at the end of Sonne's turn, untapped and dropped a Blinkmoth Nexus and a Chrome Mox to play Hokori, a move that could only spell trouble for Sonne – blue decks don't like Winter Orb.

Sonne, however, had that Chrome Mox which bought him some wiggle room. Jon spent his turns untapping lands, while Patnik continued to play lands, cast Auriok Champions (the second meeting a Mana Leak) and peck away with Nexus. Finally on turn eight, Sonne made his move. Playing the final piece of the power grid – an elusive Urza's Power Plant – solved Jon's Hokori issues and allowed him to resolve Memnarch.

"After I cast the Hokori, I drew nothing but lands and more Hokori," lamented Patnik, "I was feeling pretty good when I resolved [Winter Orb], but I just drew literally no cards that weren't a Hokori or a plains after that."

Mike chose to play, and both players kept their initial seven.

Mike again had no one- or two-drops on his turn, while Sonne dropped a Mine and a Chrome Mox (Mana Leak) on turn one, following with a Serum Visions (scrying one to the bottom) and a second Island. Patnik took advantage of the momentary lack of blue mana for Sonne to Raise the Alarm.

Patnik played a third land and got his beat on. His Leonin Skyhunter met a Mana Leak, but Suntail Hawk slid out to join the squad. Sonne cast his trademark third-turn Solemn Simulacrum, tapping out to accelerate his mana development despite holding an Annul, critical against Patnik's Glorious Anthems and Damping Matrices. Predictably, Patnik, though stuck on three lands, had the Anthem and brought for two with the Suntail Hawk. 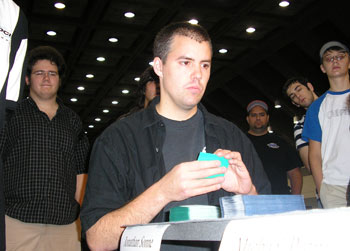 Blue was a good friend to Sonne all weekend.

Sonne seemed unconcerned with the Anthem, however, as he dropped a fifth land and summoned a Razormane Masticore – capable of dealing with 2/2s as efficiently as 1/1s. Although following a Condescend on Patnik's Eight-and-a-Half-Tails, Sonne was Razormane-locked (holding a single card), Patnik's chances looked grim. He played a second Anthem and got one last beat in with the doomed Suntail Hawk.

Sonne went on the offensive, clearing Patnik's board over the next three turns and taking him to a precarious 5 life. Patnik finally found land number four – a Blinkmoth Nexus – but had no play on his turn. Jon discarded his sole card – a second Razormane – and drew for his turn, swinging into what he assumed would be a sacrificial Nexus. Patnik, however, had slow rolled a Raise the Alarm – making two 3/3 soldier tokes courtesy of his double Anthem. The Nexus was activated and the three gang-blocked the Razormane – enough to overcome the vicious beast despite its five points of first strike damage. Jon had drawn a land, and the Condescend on top of his deck did nothing to delay the inevitable. Jon conceded almost in disbelief at the turn of events.

Sonne opted to play first, both players keep their opening seven, though Patnik seemed to seriously consider a mulligan – whether for show or for real, we'll never know.

Game 3 began in what had become predictable fashion; Sonne countering a Leonin Skyhunter on turn two and following up with a turn-three Solemn Simulacrum thanks to his standard early Chrome Mox (Rewind). Patnik turned up the heat though with a Nexus and a second Skyhunter on Turn three and a second Nexus, a Lantern Kami and a Raise the Alarm on turn 4 when Sonne EOT'd a Thirst for Knowledge. Jon was holding the answer to his weenie problems in hand – a Triskelion – but failed to peel a sixth land, having to settle for a Serum Visions (pushing one card to the bottom) to nestle an Urza's Tower just one draw step away on top of the deck.

Whether it would be enough was in serious doubt, however. Patnik played a third consecutive Blinkmoth and swung with a pumped up Nexus, the Lantern Kami and the Skyhunter, taking Jon to 13. Jon played the Tower and the Triskelion, and seemed to be back in the game – though the Nexuses could prove difficult to work around with their sneaky pump abilities. Jon was denied the luxury of picking and choosing his spots, however, when Patnik threw down a Damping Matrix, which would turn the Trike into a vanilla 4/4.

With few other options, Sonne killed off the Skyhunter and Lantern Kami and traded the tiny Triskelion with a soldier token, dropping him to 11. Sonne's deck, however, began coughing up land and counters rather than search or animals, and despite a desperation Condescend on his own Chrome Mox, Sonne fell to the relentless assault of Patnik's triple Blinkmoth Nexus.

Sonne re-sideboarded, removing the 2 Rewinds in favor of 2 Concentrate.

Sonne opted to play first, and both players kept their opening seven.

Jon led off with Island and Mike, for the first time this match, had a one drop – a Lantern Kami. Sonne dropped an Island and, obviously, Chrome Mox (Echoing Truth) to power up a Thirst on Patnik's EOT, following his addition of a Suntail hawk to the board. On turn three Sonne played, say it with me folks, a Solemn Simulacrum, tapping out but accelerating into his fourth land. Mike continued the offensive, adding a Skyhunter, but missing his third land drop.

Sonne then brought out the Big Dog; tapping out for turn four Razormane Masticore.

Patnik needed a peel. He had been holding a Terashi's Grasp since the opener, but was staring at two lonely plains. With Sonne tapped out, this might be his only opportunity to kill the Razormane. Mike drew and .......Eight-and-a-Half-Tails stared back at him.

Mike pressed the attack, trying in vain to race the bolting Masticore and Jens, but it was not to be. Finally drawing his third and on turn seven, he sheepishly tried to Grasp the Masticore, which Sonne predictably countered for the win.

Sonne was trusting in fate this game. Well, fate, or a well placed confidence in his mana base, keeping a hand containing only Urza's Mine and Chrome Mox as far as mana was concerned.

Patnik had no turn-one play and Sonne dropped the Mine and Mox (Echoing Truth) into play, having not peeled a land. Patnik chanced a Skyhunter and Sonne crossed his fingers and Condescended for one. The Condescend revealed no lands, but there was a Serum Visions, which would show Jon three more cards. After a few moments' thought, however, Sonne buried both of them, trusting that land was forthcoming. His deck complied, yielding an Urza's Power Plant. Sonne Leaked a second Skyhunter, and Patnik missed his third land drop. Sonne failed to take advantage, also missing his third land drop, but following an Isamaru from Mike, Sonne EOT'd a Thirst drawing three beautiful lands, needing but a single one to get his Solemn Simulacrum (and a fourth land) into play.

Patnik finally hit his third land drop and juiced up his hound with Glorious Anthem. Sonne upped the ante with a Triskelion, banging in for two bringing Patnik to 18. Patnik added a Damping Matrix to his board, making the Trike into "only" a 4/4 beater, but his deck would produce little else.

A vanilla 4/4 proved to be a dangerous enough weapon, biting chunks out of Patnik's life total, and was joined by Meloku two turns later. Patnik threw a Grasp at Trike – counter. Sonne banged for 4. Patnik tried again. With a single card left in his hand, Sonne Echoing Truthed the Damping Matrix in response to the second Grasp, freeing both Trike and Meloku. Triskelion pinged Mike twice and then "did the honorable thing" taking its own life and, facing what would be a swarm of unblockable Meloku tokens, Patnik congratulated Sonne on his victory.

Jon Sonne defeats Mike Patnik 3-2 and advances on to become a member of the U.S. National Team. Patnik will be the alternate, earning an invite to Worlds in the process.