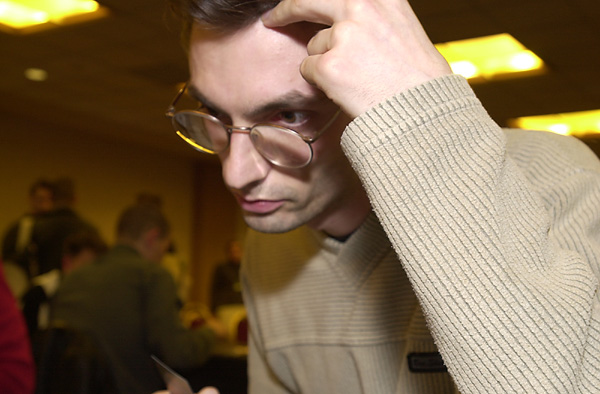 Warren Marsh was looking dapper in his signature sleek, black suit when I caught up to him at the end of Day 1 to request an interview. To my surprise, the tall Englishman's first reply was "Do you want an interview with naked Warren or Warren in a suit?" Not to be outdone, I asked him what exactly an interview with naked Warren entailed. After thinking for quite a while, he admitted that he wasn't quite sure. "I'll have to get back to you on that one," he grinned. Mr. Marsh still hadn't worked out the details of his nude persona when we met to finish the interview today after round nine, but he assures me he's working on it. Fortunately, he did have a few minutes to talk to me about Magic, fashion, and his hopes for this Pro Tour.

Marsh is 28 years old and hails from Manchester, England. He has finished in the Top 32 at numerous Pro Tours, but his best finish was taking second place at Pro Tour - New York 2000 with his Masques Block Rebel deck. He is up to his old tricks again today, playing a mono-white Rebel deck that is not terribly different than the one he played in New York. He worked on the deck with fellow Brits Ben and Ivan Ronaldson, Rich Edbury, and Stewart Walker, and members of the loosely formed European Alliance. Their deck configuration is geared toward the mirror match, running no Crusades, two Ramosian Sky Marshals, and a main deck Rebel Informer. Marsh went into Day 2 at 55th place, but luck has not been with him so far today. "My goal at this point is to finish in the Top 16-32 and win some money," he says.

Money would be a good thing for Marsh, who is among the few lucky enough to earn their living playing Magic. "I used to work in a bar," he says, "but I've been able to concentrate on Magic since the Master's series started." With a minimum of $2000 from the Masters series and potentially more from the main event, Marsh can be content with this weekend's work.

Other than being one of England's top players, Marsh's claim to fame is being the best-dressed man in Magic. "I started it at Worlds this year," he explained. "I decided that it would be my thing to wear a suit, so I went out and bought several. You know, they like that-intelligent looking Englishman in a suit. You get more interviews, more feature matches. It sells well." And did his strategy work at Worlds? "It was a little hot there, but yes, I think it did," he laughed. I asked Warren whether his suits have also helped him to meet women. "Not yet," he said, "but that depends- what are you doing tonight?" Little did I know when I chose to interview Marsh that I would be engaging him in his favorite hobby, which he told me was "chatting with women." He admits that he is "looking for a mate," but is not hopeful that his other favorite pastime, playing Magic, will help his endeavor. Hmmm. This reporter, at least, is wondering whether to prove him wrong.