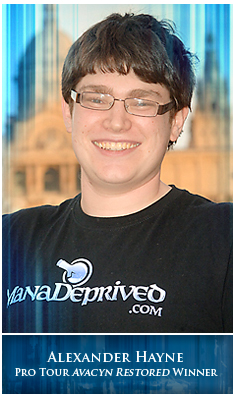 Alexander Hayne has gone through quite a transformation over the past year. Before Pro Tour Avacyn Restored, he was a rookie best known for a second-place finish at Grand Prix Montreal 2011, where he was knocked out in the finals against seasoned veteran Rich Hoaen.

But then, a miracle happened. Actually, make that a few.

Hayne came equipped with a White-Blue Miracles deck at Pro Tour Avacyn Restored, a deck that was tested and tweaked extensively by a group of Canadian pro players. And in his first Pro Tour Top 8, Hayne blew away opponent after opponent with a series of powerful miracles like Terminus and Entreat the Angels. A chorus of angels sang the rookie's praise in Hayne's final match, and the roar of Canadians he traveled with followed shortly after, as Hayne locked up a victory at his first Pro Tour along with a seat in the World Magic Cup and Players Championship.