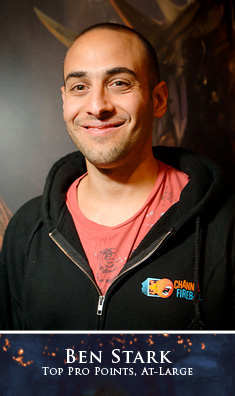 A self-described "non-competitive player," Ben Stark plays the game of Magic for one reason only: he loves it. And does he ever play it well. Long viewed by many of the top players in the world as one of the finest Limited minds to play the game, Stark has shattered that mold to become one of the most respected players in the game today.

This south Florida native has been playing the game for an incredibly long time, making his Pro Tour debut over a decade ago. While he has gone through fits and starts over the course of his career, he has really turned it on in recent years, winning Pro Tour Paris 2011 and recently finishing in the Top 4 at Pro Tour Gatecrash. Over the full duration of his career, he has earned titles in events of all formats, showcasing his firm grasp on the game, and a skill that goes far beyond a simple mastery of Limited.

Currently a member of incredibly powerful Team ChannelFireball, Stark has seen his game continue to rise. An avid user of Magic Online, Stark is always on the lookout for an opportunity to draft, be it at an event, at home, or on a plane on the way to a Grand Prix. This constant desire to play, combined with surrounding himself with a number of the greatest players in the game, has paid off immensely, helping Stark to earn his spot here at the 2013 Magic World Championship.

What is your favorite Magic card?
Counterspell

What is your favorite Magic deck?
Psychatog

Who is your favorite Magic player to watch?
I'm not a big watcher but back when I first started playing in Pro Tours in 1999, it would be Finkel.

What's your favorite format and why?
Booster Draft, All the games are different. I feel like in Constructed, once you have played 10-20 games of a matchup, you have experienced everything you are going to experience in that matchup. In Limited, every game is different.

What is your favorite draft format?
Champions of Kamigawa. It's the best set ever by miles.

On average, how many hours of Magic do you play each week?
N/A

Who taught you how to play Magic?
My friend Jared in the sixth grade.

What was the first Magic deck you built?
I used to play a local tournament every Saturday with my RUG deck when I was in 6th grade. I was on a limited budget then so every time I made Top 3 and got store credit, I would buy another dual land for the deck or things like that. It played Kird Apes, Serendib Efreets, Lightning Bolts, and Giant Growths.

At which local game store have you've played the most Magic?
For the past few years I've played almost exclusively at Cool Stuff Games in South Florida. Growing up, stores down here usually lasted a few years and then closed, so I went to a lot of different ones.

Who or what is your nemesis?
Brian Kibler, who is in this World Championship, and even though he is a friend, I can't say I was rooting for him to make it once I knew I was going to be in it. I've never beaten him and we have played a lot. And we have played more in Limited than Constructed. He just always beats me!

Where is your favorite place Magic has taken you?
Sydney, Australia for Worlds in 2002.

What does Magic mean to you?
Magic is a great game. Games expand your mind by teaching how you to analyze things. I don't think I would be half the person I am today if I hadn't started playing Magic when I was 11.

What do you enjoy doing when you're not playing Magic?
I play basketball and watch all the HBO television series. Game of Thrones is the best one but True Blood and Boardwalk Empire are also very good.

And finally... rock, paper, or scissors?
Paper. Scissors is going too deep.