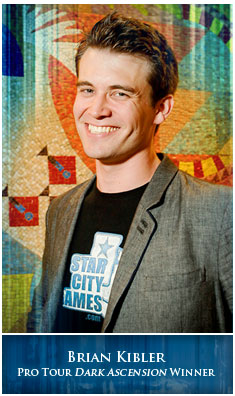 They don't call him The Dragonmaster for nothing. Hall of Famer Brian Kibler knows his way around giant red and green creatures, from the Armadillo Cloaked Rith, the Awakener that earned him his nickname at Pro Tour Chicago back in 2000 to the Primeval Titans he used to win Pro Tour Dark Ascension this year—a win that secured his spot in the 2012 Players Championship.

Kibler is on the second major leg of his career, roaring back after a roughly five-year hiatus from the top levels of the game by Top 8ing Pro Tour Honolulu in 2009. Since then he has become one of the planet's premier players, winning two Pro Tours outright and collecting a slew of Grand Prix Top 8s. This year he also captained the United States squad at the first ever World Magic Cup as the country's top pro, helping the team to a Top 16 finish.

Kibler is also a prolific writer and video streamer, sharing his outsized personality—and taste in music—with the Magic community on a weekly, if not daily, basis. One of the game's foremost ambassadors, Kibler is a deck designer with serious chops and a strategist with few peers.