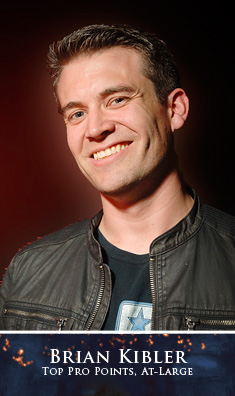 There is very little to say about Brian Kibler that hasn't been said over the course of the last fifteen years of Magic. He is a Pro Tour champion twice over, Grand Prix champion across three different decades, and Hall of Famer. He got to carry the American flag at the World Magic Cup last year, a feat that he had admitted was the one thing he wanted to do more than any other in Magic. He has been around since the earliest days of the game, and he has thrived.

Though his nickname is The Dragonmaster, he might as well have gone by The Phoenix for his efforts in revitalizing his career after a break for a few years. Coming back after a few years away from the game, Kibler has been on fire since his return, putting up numbers that are even stronger than the impressive numbers he had put up before taking his break.

As one of the players who has embraced the new digital age of Magic the most, Kibler's portfolio of articles, streams, and videos have made him one of the most beloved players on the Pro Tour, and one of the most requested players by viewers of the video coverage. Everyone wants to know how Kibler is doing, and the answer, more often than not, is very good.

What is your favorite Magic card?
Knight of the Reliquary

What is your favorite Magic deck?
Anything that lets me play with Knight of the Reliquary (and have it actually be good).

Who is your favorite Magic player to watch?
I enjoy watching Paul Rietzl play because he plays both very quickly and very well, and frequently commentates out loud on his own match.

What's your favorite format and why?
Block Constructed because it tends to provide the most unique challenges and finds uses for all kinds of otherwise unused cards. My Pro Tour Dragon's Maze deck had Debtor's Pulpit to stop Blood Baron of Vizkopa and Ætherling !

What is your favorite draft format?
Innistrad only. It was possible to draft so many cool and different decks.

On average, how many hours of Magic do you play each week?
About 5-10.

Who taught you how to play Magic?
My brother Jeff and I taught ourselves out of an Unlimited rulebook. Then in 2010, he was my guest in Chiba when I was inducted into the Hall of Fame.

What was the first Magic deck you built?
My first deck had nothing but Wild Growth s, Llanowar Elves , Forest s, and Craw Wurm s. I started ramping into big green creatures at an early age.

At which local game store have you've played the most Magic?
I don't play locally very much, but when I do it's generally at Sky High Comics in San Marcos, CA.

What's your biggest edge going into the World Championship?
I feel like my testing team (me, David Ochoa, Josh Utter-Leyton, and Eric Froehlich) has the highest concentration of deckbuilding skill in the tournament.

Who or what is your nemesis?
Myself. Early in my pro Magic days, I'd get upset or frustrated and lose focus in tournaments easily. Since I've gotten older and more mature and have gotten a better handle on my emotions, I've done much better, both in Magic and in all other aspects of life.

Where is your favorite place Magic has taken you?
Rome. It has such a rich sense of history and culture. You can just be walking down the street, eating a gelato, and you turn the corner and BAM! There's the coliseum. I've never been anywhere else quite like that.

What does Magic mean to you?
Magic has been the biggest and longest lasting source of intellectual stimulation and challenge in my life.

We're going out for food. What do you want to eat?
Indian or Sushi.

What do you enjoy doing when you're not playing Magic?
Attending musical shows or playing other games, like League of Legends.

And finally... rock, paper, or scissors?
Nothing beats rock.