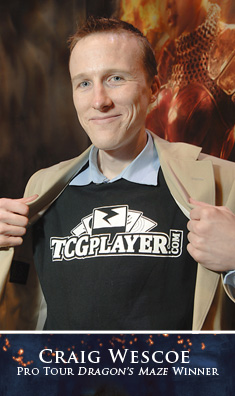 There are very few players as associated with a deck archetype as Craig Wescoe is with White Weenie. Having run a variant of the deck in seemingly every tournament he's ever played, Wescoe was most recently paid back for his loyalty with a win at Pro Tour Dragon's Maze, riding Voice of Resurgence and Advent of the Wurm (slightly larger than a weenie) to an effortless win.

Virtually always suited up in a blazer for major events, the Tennessee Magic player has been around the game for an incredibly long time, cracking the Top 8 of three different Pro Tours (all in California), all with White Weenie variants. It's no surprise that Wescoe lists California as his favorite place to play Magic!

As a result of his long tenure within the Pro ranks, Wescoe feels very comfortable with the other players in the 2013 Magic World Championship, which should make him feel right at home. While he may be outside of California for this event, he can at least take solace in the fact that he has four different formats, and consequently four different chances, to recruit a White Weenie army.

What is your favorite Magic card?
Swords to Plowshares

What is your favorite Magic deck?
White Weenie

Who is your favorite Magic player to watch?
Paul Rietzl

What's your favorite format and why?
Cube Draft, because it allows me to build the entire format however I choose.

What is your favorite draft format?
Dark Ascension-Innistrad-Innistrad

On average, how many hours of Magic do you play each week?
40-50 hours.

Who taught you how to play Magic?
My older brother Clark and I learned together from the rulebook and a pair of starter decks.

What was the first Magic deck you built?
The first competitive one was a B/G Storm Cauldron , Fastbond , Drain Life combo deck.

At which local game store have you've played the most Magic?
CM Games in Knoxville, Tennessee

What's your biggest edge going into the World Championship?
My familiarity with most of the competitors is my biggest edge.

Who or what is your nemesis?
Brian Kowal

What does Magic mean to you?
It's an interesting and challenging hobby and also a job, but more importantly it's a community and the common nexus of much of my social life. Many of my closest friends I've met through the game.

We're going out for food. What do you want to eat?
Vegan

What do you enjoy doing when you're not playing Magic?
I recently planted a garden. Our squash, tomatoes, basil, and peppers are doing well.

And finally...rock, paper, or scissors?
Paper, because (like me) it's usually white.