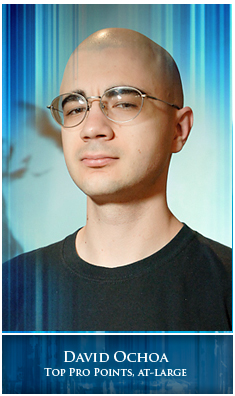 If there were ever living proof that actions speak louder than words, it would be named David Ochoa. As one of the most recognizable personalities at the core of one of the strongest teams in Magic history, Channelfireball, Ochoa has done an immense amount to further the art of communication in Magic, ironic considering how relatively taciturn he is.

Despite his reserved demeanor, Ochoa is one of the funniest, most insightful writers of Magic that the game has ever seen. As the face of Good, Ochoa's articles breaking down drafts and discussing Limited strategy are absolutely must-read. Bright, funny, and incredibly insightful, they encapsulate how the face of Magic strategy has changed over the past decade, from the old days of message boards and regionally shared ideas to single-serving strategy, with each new article containing a lesson, though the articles don't necessarily start out with that lesson in mind.

David Ochoa, Ocho, Webb...whatever you choose you call him, one thing is for certain: he earned his spot in the Players Championship. He really is Good.

So watch out, Evil.