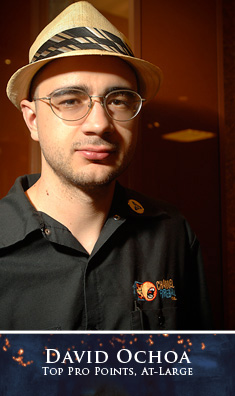 The voice of good in the face of an evil world, David Ochoa has been both a moral and physical guide to many aspiring players to make their way to the Pro Tour over the past years. Through his numerous hilarious articles on channelfireball.com, Ochoa displayed his unique perspective and wit with the entire Magic community, a trend he has continued with his many cameos in the Walking the Planes video series.

A noted foodie and man of good taste in facial hair, Ochoa was long viewed as one of the best players to never have made the Top 8 of a Pro Tour until he erased that stigma at Pro Tour Return to Ravnica at the beginning of the season. Considering his presence as an at-large member of the World Championship despite not having a large number of Top 8s to his credit, Ochoa clearly has held a high median finish throughout his career, always within striking distance of cracking that Top 8, but often falling short.

Often quiet, though with a wry sense of humor, Ochoa is one of the more colorful characters the Pro Tour has to offer these days. Making his second appearance as one of the Top 16 players in the game, Ochoa has yet one more chance to teach the world how good he is. Expect him to deliver.

What is your favorite Magic card?
Gifts Ungiven . It's tricky, powerful, complicated, enables interesting strategies, and fits into a wide range of decks and formats.

What is your favorite Magic deck?
There have been a few decks that I've liked quite a bit, and there's no one favorite of mine. At Pro Tour San Juan, we played RUG in Zendikar Block. There was so much going on with Lotus Cobra , Explore , Oracle of Mul Daya , and Jace, the Mind Sculptor . It was a blast to play and very powerful. Other decks include Blue-White Desire in Extended circa 2005 and Gifts in Vintage before Merchant Scroll , Gifts Ungiven , and Brainstorm were restricted.

Who is your favorite Magic player to watch?
Shouta Yasooka. He's always playing an interesting brew.

What's your favorite format and why?
Vintage. There are many nuances and it's quite complex. Unfortunately, it undeservedly gets a bad rap. A real problem is that has accessibility issues and not much tournament support/interest which feed off each other.

On average, how many hours of Magic do you play each week?
About twenty. The amount of time scales based on how much content I'm producing, what the live tournament schedule is like, and whether there are interesting draft queues up.

Who taught you how to play Magic?
Eric Mixon, my oldest Magic friend. He ran a shop in town, and there was a sealed league during the summer between my sophomore and junior years in high school. I was still terrible when I came back to school in the fall, but it was much easier to beat my friends at lunch than when I had left.

What was the first Magic deck you built?
My first deck didn't have a name. I bought a SCRYE magazine, and there was a page or two with decklist ideas. One of them had Elven Lyre , Whirling Dervish , and Scryb Sprites ; I thought it was pretty hot stuff at the time.

At which local game store have you've played the most Magic?
C&J Collectables, Newark, CA. It's where I spent most of my time playing FNM and other tournaments back in the day.

What's your biggest edge going into the World Championship?
Last year I would have said "a great mustache," but that's sadly not the case this time. I've conscientiously leveled the playing field, as it would be completely unfair to have such an alluring advantage over my fellow magicians for people to rally behind and cheer for. Truthfully, I would have to say that I've got a good resource network that has helped me prepare... and also my incredible hat.

Who or what is your nemesis?
Time. It's fleeting.

Where is your favorite place Magic has taken you?
Machu Pichu. A group of us went to Grand Prix Santiago in 2011 which was Innistrad Sealed. Peru was right next door, so we decided to take a detour for a few days of training, drafting in the proper environment.

What does Magic mean to you?
Magic is many things: a medium, a scale of measure, a lifestyle. I've been involved with the game on some level for seventeen years, longer than I haven't, and that's a testament of how successful and captivating it is. It's managed to seep into every area of my life: work, social, pleasure, and so on. It's one of my passions and has come to define me.

We're going out for food. What do you want to eat?
I'd want something that incorporates local, seasonal ingredients. It doesn't have to be complex or a specific style as long as the focus is on the first part and is respected.

What do you enjoy doing when you're not playing Magic?
Cooking.

And finally... rock, paper, or scissors?
I'll go with Rock.