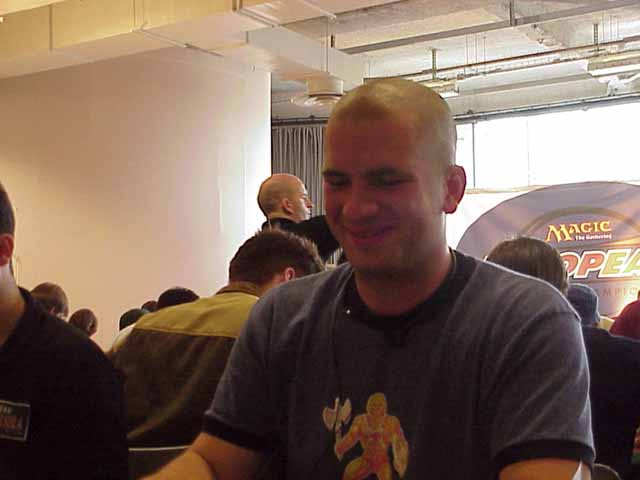 "I first learned Magic from my high school friends. Then, I moved to Cologne, I where I started to playing Magic more and more seriously. I finally broke into the tournament scene during the qualifiers for Pro Tour Columbus."

"When I first started, I thought that Counterspells could destroy things that were already in play. I really had no concept of what a 'spell' was."

"The original Team CCC was Markus Bell, Thomas Esser, Tim Gloeckner, and Kai Budde. They helped me improve during my formative years."

"I like Type I. I think it's more interesting, more balanced and more skill-based than most people give it credit for. I played Type I at the Magic Invitational, and I found that it was actually the most interesting format."

"I liked the Gamekeeper deck I used at year's Euros, which was built by myself and Andreas Jonsson. It was a combo deck based on Altar of Dementia, Abduction, and Iridescent Drake. Nobody knew how to play against it, and I won two or three games just because my opponent didn't know what I was doing."

"I always have a great time playing against Gary Wise, since he's lively and easygoing. And we always make it a World War II grudge match: a German versus a Jew."

"Jon Finkel. He understands the mechanics of the game better than anyone."

"Thawing Glaciers is one of my favorite cards. I was also a big fan of Phelddagrif; it was a four-casting-cost 4/4 with really good abilities, yet no one played with it."

"Cycling. It can help you a lot if you're mana hosed. I really like the cycling lands in limited tournaments; you could always play with 18 lands and cycle away the extra mana if you didn't need it."

"In a famous match, Mike Long was playing Prosperous Bloom against Mark Justice. Mike had sideboarded out one of his Drain Lifes, and he had to cast the other one earlier in the game. But he kept his cool, and cast Meditate, Infernal Contract, and Prosperity to draw his entire deck. Mark assumed that Mike had the other Drain, so he conceded."

"Playing for Top 8 in Chicago 1999 against Stephen Valkyser was an unexpected moment of respite. Even though a lot of money was on the line, we were friends, and there wasn't the type of pressure that you'd generally expect. He was happy for me to make it, and I would have been delighted to see him win as well."

"I could probably say Malaysia or Tokyo, one of those more exotic locations, but my true favorite city is New York. It's so compact and close-together that you can move around without driving. And I love the modern, big-city feel."

"I'm very proud of the Iridescent Drake deck that I created for the European championship in 1999. US Nationals was a week before, and no one played it there. But at Euros, three different groups, the French, the Swedish, and I all came up with the deck independently."

"Pro Tour Chicago was the first Pro Tour I'd ever played in, but despite this fact, I was
confident that I'd at least make top 32 because I understood the format so well. (I can't say that for any event I've played in since.) It was no surprise when I came out as the winner."

"I'm online all the time and I talk about Magic every day. Since I'm in school, I don't get many opportunities to play real live Magic, though. I probably play once every two weeks."

"I playtest online with the ten-person Euro Alliance mailing list. At Pro Tour New York a lot of the tech that we developed got leaked to friends, but now the list is fairly confidential."

"The invention of the Pro Tour. The big tournaments used to have a Mox for a prize, and you had to wade through for five rounds before you got to an opponent who was as serious as you were. Now, there's a much more competitive feel to the game."

"I used to think that everyone thought I was a chump. But apparently now some people think I'm pretty good."

"I play more soccer than Magic, and I play basketball as well. And poker, of course, just like every other Magic player. I have other interests, but not more time."