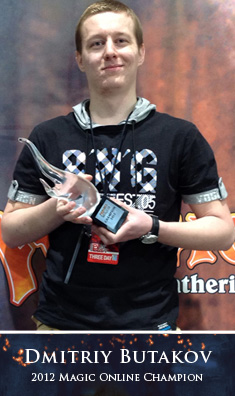 The 2013 Magic Online Championship winner, Dmitri "Butakov" Butakov, is one of the newer faces that will be appearing at this year's 2013 Magic World Championship. While he earned his spot in the World Championship via his performance in the MOCS, it is impossible to take anything away from him. The players he had to defeat on his way to the title included Canadian Pro player David Caplan, Dutch stream master Jan van der Vegt, and Grand Prix champion Sam Pardee. He even had to face fellow World Championship competitor Reid Duke.

Having earned his MOCS entry via his performance in Modern, Butakov's experience in the MOCS provides him a leg up on the multi-format nature of the World Championship. The Russian player treats Magic Online as a full-time job, spending upwards of forty hours a week practicing and preparing, something that will be immensely helpful in the weeks leading up to the World Championship.

Having initially viewed Magic as a source of income, as a true professional does, his time in the MOCS has begun to change that. This trip to Amsterdam will be our first chance to see if Butakov can continue his success in a transition to paper Magic in the same way that Brad Nelson and Reid Duke did before him.

What is your favorite Magic card?
Fires of Yavimaya

What is your favorite Magic deck?
Former Standard Eldrazi Green

Who is your favorite Magic player to watch?
N/A

What is your favorite draft format?
Shadowmoor

On average, how many hours of Magic do you play each week?
Around 40 hours.

Who taught you how to play Magic?
My uncle Pavel Butakov.

What was the first Magic deck you built?
I don't remember it, but I'm sure it was something red-green.

At which local game store have you've played the most Magic?
There are not many game stores around here.

What's your biggest edge going into the World Championship?
N/a

Who or what is your nemesis?
I prefer not to have one

Where is your favorite place Magic has taken you?
Chances are pretty likely it will be Amsterdam.

What does Magic mean to you?
It was a source of income before the Magic Online Championship Series, and now it's becoming more than that.

We're going out for food. What do you want to eat?
Anything non-vegetarian.

What do you enjoy doing when you're not playing Magic?
Mix-fighting, cooking, and hunting.