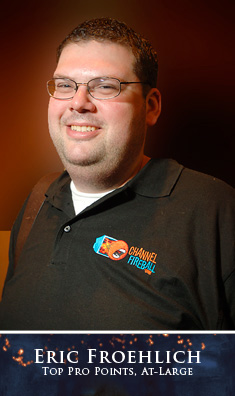 It was an emotional moment when Eric Froehlich secured his place in the Top 8 of Pro Tour Gatecrash, the feelings of the moment quite clear as he pulled his interviewer back over to explain how important it was to him to be able to play Magic and do well. This wellspring moment is just one of many powerful images from Froehlich's career.

Having played the game for a very long time, Froehlich has really been moving up his performances to a new level as of late. After making the transition from professional Magic player to incredibly successful professional poker player, Froehlich hasn't let the split in his time dull his skills. Between some incredible Grand Prix performances and his Top 4 finish at Pro Tour Gatecrash, Froehlich made his way to an incredible third-place finish in the most recent Player of the Year race.

Currently on the ballot for induction into the Hall of Fame, Froehlich's recent run is reminiscent of those of Hall of Famers Brian Kibler and Jon Finkel, who took time away from the game before coming back to absolutely crush the game at an incredibly high level. Along with Ben Stark, Froehlich is viewed as one of the best Limited minds on the planet, though, like Stark, Froehlich's skills are clearly applicable to more than just 40-card Magic.

What is your favorite Magic card?
As far as art is concerned, I like a lot of the original Alpha cards, with Shivan Dragon and Birds of Paradise being a couple of my favorites. I love Dark Confidant , although the art on that one is a bit suspect...

What is your favorite Magic deck?
One with 40 cards.

Who is your favorite Magic player to watch?
Over the past few years, it's Luis Scott-Vargas. He sees the game and plays better than everyone in that span and sees it almost instantly, always keeping up a fast pace of play. Of all time though, it's Jon Finkel...he's just the best of all time. My favorite match was the Pro Tour Chicago 1999 Finals that Bob Maher won with Oath, however. I've re-watched it dozens and dozens of times.

What's your favorite format and why?
Team Rochester Draft. It was the most skill intensive and complex format they have ever made and every Magic tournament is better with teams.

What is your favorite draft format?
Odyssey. I had quite a bit of success that year.

On average, how many hours of Magic do you play each week?
About 1 hour.

Who taught you how to play Magic?
My dad actually read the entire rulebook from our Starter Kit of Revised and taught me and my then 7 year old brother how to play (I was 10). All of my friends were playing at the time and I just took it from there.

What was the first Magic deck you built?
The first ones I can remember that wasn't just a mashing of all the cards I had were a Lord of the Pit , Breeding Pool , Derelor deck and a Force of Nature / Spirit Link deck.

At which local game store have you've played the most Magic?
Dream Wizards in Maryland was my local PTQ stomping grounds.

What's your biggest edge going into the World Championship?
Everyone is a great competitor, so while I think my ability to read people might be higher and that I'm a more experienced drafter, I can't imagine having any real edge on these guys.

Who or what is your nemesis?
If I have a nemesis, I don't think I know about it (yet).

Where is your favorite place Magic has taken you?
I hate, and I mean really hate, any time I have to leave the USA. I've traveled so much in my life, I'm getting older, and I'm really not that into airplanes anymore. That being said, Japan is just such a super cool place. I hate the time it takes to travel there, but my time especially in Tokyo was truly awesome. I certainly never want to put in the time to get to Australia again (sorry), but Worlds in Sydney was also amazing. It was like a cleaner New York (a place I also love very much).

What does Magic mean to you?
Everything. Magic has been the biggest thing in my life for as far back as I can remember. Every single one of my closest, lifelong friends I have met through Magic. Even though I took years off, really never playing in that span, it got me back and my passion is just as strong as ever. There is no other venue where there are so many like-minded people and I've been able to form so many bonds and connections with people because of this one simple game. I owe it everything.

We're going out for food. What do you want to eat?
I'm pretty easy going. Sushi is my favorite food, but a good steak isn't far behind.

What do you enjoy doing when you're not playing Magic?
Playing poker, watching sports, and playing with my Pomeranian Honey.