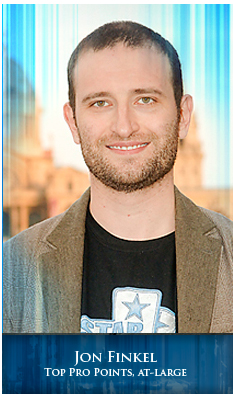 No one else at the Players Championship can match Jon Finkel's achievements in the game of Magic. After Finkel was inducted into the Hall of Fame in 2005, however, he had a less-than-triumphant return to professional Magic. After stumbling in his first few tournaments back, players started to wonder whether Jon had what it took to ever win again.

"Yeah he was great back then, but he just isn't good anymore."
"I don't think he even cares enough to test."

While that silenced Jon's critics for a while, it didn't take long for the peanut gallery to start up again.

"Sure he's good at Limited, but he just doesn't practice enough to win at Constructed."
"How is he supposed to keep up with players who play Magic Online for 20+ hours a week?"

That time around, Jon's critics may have been onto something. Jon was spending a lot of time focusing on his company, and not a lot of time trying to figure out what deck he should play at the next Pro Tour.

But then Jon decided that he wanted to start winning again.

After surrounding himself with a team of top deckbuilders, including Sam Black, and Patrick Chapin, Finkel was able to Top 8 the last two Pro Tours. Now, Finkel is once again universally considered one of the best players in the world.

And that isn't likely to change anytime soon.