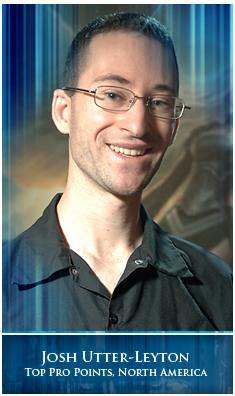 Josh Utter-Leyton is a Pro's pro and member of Team Channelfireball who enjoyed a career year in 2011. He had his best Pro Tour finish ever at Philadelphia, where he took his "Counter Cat" strategy all the way to second place, falling just short to fellow-invitee Samuele Estratti. He also finished in the Top 8 of the World Championships as part of a platoon of Channelfireball players who took half the Top 8 slots.

Utter-Leyton now has three Pro Tour Top 8 finishes to go along with four Grand Prix Top 8s, all since 2010. Representing the top North American Pro at the Players Championship, Utter-Leyton appears to be at the height of his powers, adeptly piloting just about anything to strong finishes. Be it Standard, Modern, Limited or Legacy, Utter-Leyton is a force to be reckoned with at any event.

"Wrapter," as he's known, has also stretched his writing muscles as part of his "Utter Beatings" series, often breaking down and explaining some of the most complicated decks around.