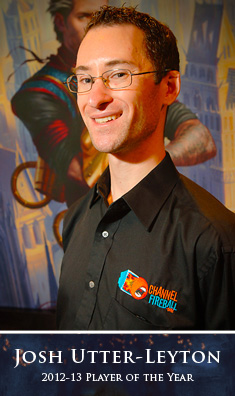 Ladies and gentlemen, your 2013 Player of the Year, Josh Utter-Leyton.

Utter-Leyton's possession of the title wasn't set until late into the closing rounds of Pro Tour Dragon's Maze, nervously watching as Tom Martell made his push for Top 8, but falling narrowly short. With the weight of the world off his shoulders, Utter-Leyton began to gush, incredulous that he was the new Player of the Year.

Having described his time in last year's Players Championship as "the greatest tournament experience he's ever had," Utter-Leyton was ecstatic at the opportunity to give a repeat performance. Earning his spot last year by virtue of his position as one of the top ranked players in the world, Utter-Leyton's calling card has been his utter consistency, seemingly never posting a finish outside of the Top 64. A core member of Team ChannelFireball, Utter-Leyton is surrounded by some of the best minds the game has to offer, and admits that it has been a major factor in his improvement as a player.

Another fairly quiet player once in the game, Utter-Leyton can always be located thanks to his signature headphones and cool demeanor. He can go from stoic to effusive in an instant. Despite being relatively taciturn, when Utter-Leyton speaks, people listen. This is why his articles are some of the most well-received of all of those posted on channelfireball.com.

What is your favorite Magic card?
Sensei's Divining Top

Who is your favorite Magic player to watch?
Luis-Scott Vargas

What's your favorite format and why?
Legacy. I love playing with cards like Brainstorm and Sensei's Divining Top , and really like the huge variety of interactions and combinations of cards you get to play with and against in the format.

What is your favorite draft format?
Rise of the Eldrazi.

On average, how many hours of Magic do you play each week?
15 hours.

Who taught you how to play Magic?
I taught myself from a Revised rulebook.

What was the first Magic deck you built?
I don't remember the first, but I know that the first deck I built that I thought was good was almost all Prodigal Sorcerer s and its ilk.

At which local game store have you've played the most Magic?
Channel Fireball Game Center.

Who or what is your nemesis?
Lava Spike

Where is your favorite place Magic has taken you?
Japan

What does Magic mean to you?
I love playing games and Magic is the best game I have ever played. More than just entertainment, though, Magic has entrenched itself as an enormous part of my life. Preparing for, traveling to, and playing in tournaments is how I spend the majority of my time. It's also a huge part of my social life, as almost all of my closest friends I know through Magic.

We're going out for food. What do you want to eat?
Curry

What do you enjoy doing when you're not playing Magic?
Running or playing League of Legends.

And finally... rock, paper, or scissors?
Scissors, leveling everyone looking to beat up on good old rock.