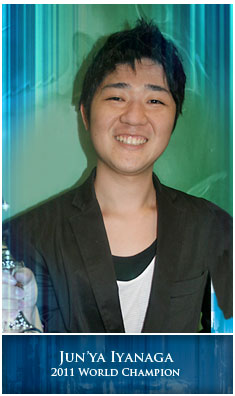 When he completed his studies, Jun'ya Iyanaga decided that he wanted to spend 2011 playing professional Magic for a full year before he began a career that would, in all likelihood, prevent him from traveling outside of Japan more than once a year.

He made the most of that year by finishing in 7th place at the Magic Online Championship, and winning the World Championships. A few weeks after winning Worlds, Iyanaga vanished from the competitive Magic scene so he could focus on his new job.

While Iyanaga couldn't take the time off of work necessary to play at Pro Tour Dark Ascension in Honolulu or Pro Tour Avacyn Restored in Barcelona, he was able to save up just enough vacation days to compete in the Players Championship.

And, just like at the World Championships in 2011, Iyanaga is ready to make the most of what may be the last professional tournament he gets to play in all year.