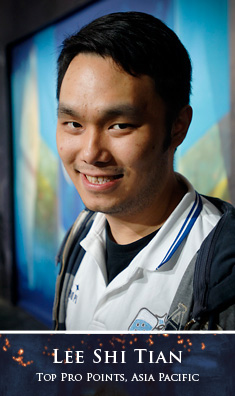 As the top-rated player in the APAC region, beating Tzu-Ching Kuo out by a single point, Hong Kong's Lee Shi Tian has a chance to make a statement with a win at the 2013 Magic World Championship. As he explains in his questionnaire, people in Hong Kong give very little respect for gamers. The prestige, and prize, from an event of this caliber would go a long way towards helping him begin to change peoples' minds.

It is the way of the APAC region to change minds in the last couple of years. Lee's testing friend and rival Tzu-Ching Kuo managed to take down the World Magic Cup last year, snapping peoples' attention to the APAC region, and garnering them far more respect. Lee has made his mark as well, working in conjunction with players from Canada and Chinese Taipei to put up some very solid results, including a few near misses at Grand Prix events this year.

The fact that he is working with a group that isn't one of the super high-profile teams means that he comes into this event as somewhat of a dark horse. Players won't know what to expect from him, as they haven't been testing with him for weeks on end coming into this event. This will be an interesting week for him, as he moves from the World Championship straight to the World Magic Cup, where he will try to lead team Hong Kong to victory.

What is your favorite Magic card?
Mercadian Masques Brainstorm . The flavor text and the art rocks.

What is your favorite Magic deck?
Human Reanimator. W built it the week after Pro Tour Gatecrash and was just one step away from taking down Grand Prix Quebec City.

Who is your favorite Magic player to watch?
Samuele Estratti. The match where he beat Chikara Nakajima in Pro Tour Philadelphia and the bluff against Tom Martell in Pro Tour Dark Ascension is art.

What's your favorite format and why?
Draft, deck building is fun.

What is your favorite draft format?
Forcing Naya in triple Shards of Alara.

On average, how many hours of Magic do you play each week?
Around 5 - 10 hours.

Who taught you how to play Magic?
My memory fades...

What was the first Magic deck you built?
Squirrel Opposition in Invasion Odyssey Standard.

At which local game store have you've played the most Magic?
Magic Farmm owned by my good friend Lam Tzu Yeung.

Who or what is your nemesis?
The majority of people in Hong Kong show no respect to gamers. I can never change their mind except proving them wrong by action.

Where is your favorite place Magic has taken you?
I was here in Pro Tour Amsterdam 2010. The place, people, food, weather, everything here is awesome.

What does Magic mean to you?
The game led me to many good friends all over the world. Some of them are really close ones. I am sure I will enjoy the moment with them more than playing Magic.

We're going out for food. What do you want to eat?
Chinese food, not even close.

What do you enjoy doing when you're not playing Magic?
Stay home watching TV with my girlfriend.

And finally... rock, paper, or scissors?
Can't really see any option except ROCK. Be a man!!!