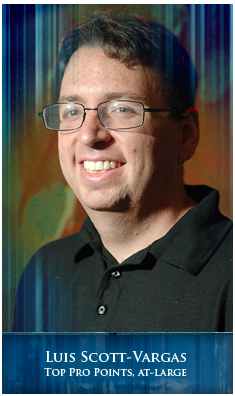 "You can't spell ELVES! without LSV."

It's hard to forget that line from Pro Tour Berlin back in 2008, when Luis Scott-Vargas earned his first Pro Tour Top 8 and victory with the ferociously fast Elves! combo deck.

Scott-Vargas has been playing the game for years. He made his first Pro Tour appearance back in 2004, but didn't blow onto the scene until he earned a spot on the U.S. Nationals team in 2006 alongside Paul Cheon and Ben Lundquist. From there, he went on to win the 2007 U.S. National Championship title, and he also secured his first Grand Prix win that year in San Francisco.

But his first Pro Tour win didn't come until Berlin in 2008, where he stormed through the competition (literally) with his Elves! combo deck. Today, he's earned himself five Pro Tour Top 8s and eight Grand Prix Top 8s, including four wins.

As a member of Team ChannelFireball, Luis Scott-Vargas is one of the juggernaut players from the Pro Tour, and his solid play and sense of humor will make him a pleasure to watch at the Magic Players Championship.