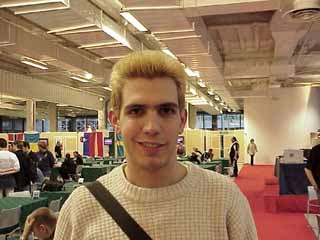 "My brother taught me how to play, just after Arabian Nights was released. We went on a skiing trip with two other friends, and he brought some cards with him. He made some decks for all of us, and we all learned how to play. When we came back to Paris, we all bought cards."

"My friends and I were confused by the Unlimited rules, which said that you couldn't regenerate a dead creature. We thought that this mean that once a creature was regenerated, it was 'dead,' and so it could only be regenerated once."

"I wasn't really influenced by anyone because I was one of the first Magic players in France. I first started playing Magic at a store called the L`�uf Cube, which was where all Magic in Paris evolved.

"In the beginning, I preferred Constructed over everything else. That was before decks proliferated onto the Internet; you could surprise your opponent with tricks. But now that I don't have any time to test, draft is my favorite format. Sometimes, a draft game will go really late when neither player has a real advantage over the other. Then it becomes really tricky and there are tons of cards on the table that no one really knows how to use."

"I created a Type I Balance deck in France before the first World Championship, a long time ago. At first it was a Rack deck with four Mind Twists, but then they restricted Mind Twist. I had to find some other card to build my deck around, and that was Balance."

"Usually, I like to play against someone who is friendly but whom I've never met. That way, I don't have to feel bad if I beat them. I always feel sad when I've won against one of my friends."

"Jon Finkel. He makes mistakes, like all of us, but when he's concentrating, he does really well.

"Demonic Tutor. You're always happy to draw Tutor, because you can get whatever card you need."

"Buyback. The buyback cards are pretty well balanced, and are a real test of skill. A good player will know when to use buyback and when to just burn off the spell. Also, if you're smart enough, you'll know how to stop your opponent's buyback spells by fizzling them."

I was really happy to see Raphael Levy make top eight at Worlds with a Standard deck that I gave him. It was a Survival and Recurring Nightmare deck, built specifically to crush blue. I played the deck in the tournament as well, but I made a decklist error and my sideboard was invalidated."

"At Worlds in 1996, I tested with Mike Long. Both Mike and I played the Storm Drain deck, which used Storm Cauldron, Fastbond, and Drain Life to win. I was paired up against Mike and we wanted to intentional draw, but that wasn't legal at the time. So we played to a draw by refusing to sideboard appropriately for the matchup. The judges were not happy with our behavior, but because the intentional draw rule was going to be implemented two months later, they decided not throw us out of the tournament."

"Los Angeles. Playing on the Queen Mary is awesome, and the city is great. It's too bad that they are putting PTLA earlier and earlier each year. Last year it was in February, although even then we were still able to swim in the pool."

"I'm the one responsible for all the 'rules trick' decks. For example, last year I built a deck for French Nationals using Yawgmoth's Will and Dark Ritual to generate infinite mana. Unfortunately, the head judge wouldn't let me play with my creation."

"The translator for the French version of Tempest didn't know what to name the 'sliver' cards. I told him to use 'slivoïde.' And sure enough, that's what it says on the card."

"How often do I play? Almost never. I mostly play in major tournaments."

"I have a lot of friends throughout France, and before big events we sometimes meet to playtest. Our sessions aren't as productive as I'd like them to be."

"The Sixth Edition rules. I'm sure that the work done on Sixth Edition could have been better, but it was still quite an improvement."

"In France I'm pretty well-known as a good player, but I have a very bad reputation with Wizards. I was once one of the most renowned judges in France, but I didn't like the way DCI handled things two or three years ago, and I told them."

"I was a film student for three years, so I'm a big fan of movies. I also participate in role-playing, live-action, and traditional games."