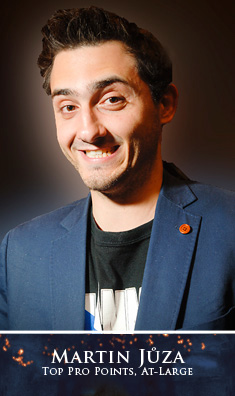 Martin Jůza is one of the most successful, most consistent players to come out of Europe since Hall of Famer Raphael Levy. Over the course of his career, he has made more Grand Prix Top 8s than most players have in Grand Prixs attended. He has won four of them, and he's done so across every continent that holds Grand Prix.

The epitome of a world traveler, Jůza has really embraced the ability the game has afforded him to travel and see the world. Along the way, he has made many friends and joined the powerhouse ChannelFireball, aiding him in his continuing search for perfection. For the past few years, Jůza has been among, if not the best player on the entire European continent.

Jůza's lone blemish on his record is the fact that he's only made two Pro Tour Top 8s, and he didn't make it out of the quarterfinals of either. Winning an event like this, against fifteen of the best players in the world, many of whom are his friends, would go a long way towards silencing his critics. Still, he has his work cut out for him. Fortunately, the Czech player is playing on as close to home turf as anyone in the tournament, with Amsterdam coming in at around 500 miles from Prague.

What is your favorite Magic card?
Counterspell

What's your favorite format and why?
Draft, I don't like Constructed because you put a lot of effort into something that completely changes right after the tournament.

What is your favorite draft format?
Time Spiral block.

On average, how many hours of Magic do you play each week?
When there is a tournament to prepare for, probably around 5-10. Normally it's 0-2.

Who taught you how to play Magic?
My friends in my class in high school.

What was the first Magic deck you built?
A monoblue deck with 30 counterspells, 4 Powder Kegs, 2 Morphlings, and 24 lands.

At which local game store have you've played the most Magic?
There was one in Plzen that closed like 8 years ago. Since then, we don't have a store.

What's your biggest edge going into the World Championship?
Not being jet-lagged for once, and and working in a bigger group.

Who or what is your nemesis?
I don't think I have any.

Where is your favorite place Magic has taken you?
Honolulu, Hawaii

What does Magic mean to you?
It's a lifestyle.

We're going out for food. What do you want to eat?
A wagyu beef steak with grilled vegetables.

What do you enjoy doing when you're not playing Magic?
Going out with friends.

And finally... rock, paper, or scissors?
Depends on my opponent.