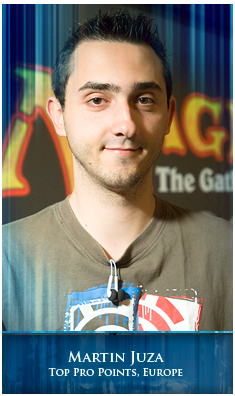 If you go to a Grand Prix or a Pro Tour this year, there's a good chance that you'll see Martin Juza there. You see, Martin loves playing Magic and traveling more than anybody in the world (except for maybe his playtest partner/travel buddy Shuuhei Nakamura)—so if there's a tournament for him to play in, he'll probably be there.

While some of the other players in the event have been scrambling to prepare for all of the different formats that they will have to play at the Players Championships this week, Juza hasn't had to stress out at all. Because of his tireless dedication to the game, Juza has already played all of the formats featured at the Players Championship many times over this past year, and consequently he has great chance to win this event (as well as every other tournament he plays in).

Juza has cemented his reputation in the game with his tireless travel and exceptional performances at Grand Prix. That body of work has made him a fixture in the Player of the Year races for the last four years...will 2012 be the year he finally breaks through and claims the title for his own?