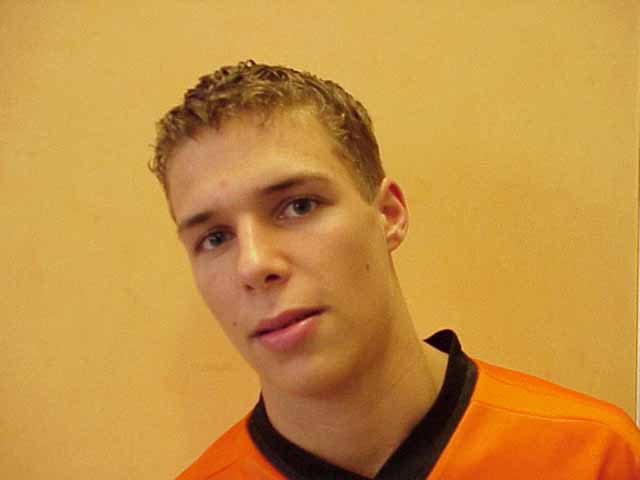 "I just saw some kids with Magic cards at my school, and I collected a few cards before I even knew how the game worked. Eventually somebody taught me how to play. I found that I could beat people who had been playing for years, and I did really well at my first tournament."

"I once played against this guy with an Unlimited Icy Manipulator in his deck. Since it didn't have a tap symbol on it, he was using it to tap like ten things a turn. I thought it was a really broken card."

"I learned to play competitive Magic from some of the best players in Holland at the time. Of course, all those guys really suck now, but at the time they had Moxes, so I had to respect them."

"Booster draft for sure. I think that draft is really "pure" magic. Anybody can take a Constructed deck from the net, but in booster draft you have to do it all yourself."

"My favorite deck was Necro. Necropotence was just too good."

"Probably Finkel, based on his results. He played really well when I saw him, like in money drafts at Pro Tours."

"I really liked Hymn to Tourach. I would always get lucky with it and remove my opponent's best cards. Nowadays, my favorite card is Tangle Wire, which is just amazing in almost any deck. It slows down your opponent a lot and you don't suffer as much, because you can remove the counter before the ability resolves and also tap the Tangle Wire itself."

"Buyback and cycling. I liked buyback because it was really balanced. You had to pay extra mana, but you got card advantage. Cycling cards are good because they allow you to play with situational cards (like Miscalculation and Wild Dogs) which can be traded away if you don't need them."

"I was ecstatic when I found out that Ryan Fuller won Canadian Nationals this year. I first met him at PT Chicago, and we became good friends. He stayed at my place in Amsterdam for a week, and he's coming again for Worlds."

"When I first qualified for the Pro Tour, I was a little kid and everybody laughed at the deck I had built myself for the tournament. Everyone else was playing Necro, but I was playing a red deck with Pillage, Stone Rain, and Balduvian Hordes. The guy next to me was chuckling when he saw me play the Hordes, and he thought I was a scrub. But it turned out that the deck did really well against Necro, and I won the tournament. The same deck was designed by another guy to win GP Amsterdam, and it was like 5 cards off from my version."

"New York. It's a great city, and it exemplifies what America is like. Everything about the place seems different from Europe, and I love the way it feels."

"At PT Chicago, I made top 16 playing a four-color black deck that I built myself. It used Black Knights, Orders, Hymn to Tourach, Bolts, Emissaries, Ernham, 'Geddons� all sorts of good stuff. And I got to play with really weird stuff in my sideboard, like Forsaken Wastes. The Wastes turned out to be pretty good against Necro and Counterpost, which were the dominant decks of the environment."

"I usually draft once a week, and if there's a big constructed tournament coming up, I playtest as well."

"I playtest mainly with Joost Winter, who made top 8 at Euros as well. Also Alexander Witt and Sven Dijt."

"I like the new money and the Masters events. Now, you can make enough money to play Magic professionally and travel everywhere."

"I try to be a laid-back and funny guy. My play style is very flexible. I used to be a well-known deck builder, but now that I've lost interest in Constructed, I'm mainly a good drafter."