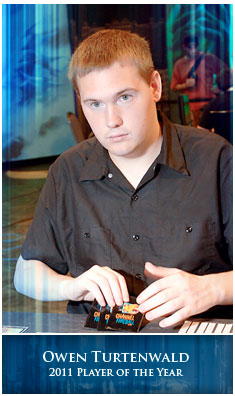 "Owen Turtenwald is probably the luckiest Magic player I have ever seen."
- Brian Kibler

Owen Turtenwald's incredible run in 2011 to take the Player of the Year title didn't happen (entirely) because he was lucky. It happened because he was playing out of his mind. It is rare to approach a wide variety of players before an event, ask them who is going to win the tournament, and get a unanimous decision. For multiple events. Yet that is exactly what happened during virtually all of last season. There was one man that everyone in the room was afraid of, and it was possibly the goofiest person in the room.

Turtenwald's meteoric rise wasn't the first exposure that the Magic playing community had to him. He has been playing the game for quite some time, but it wasn't until he found a home on a team that worked together as well as Channelfireball that he was truly able to blossom. Always the joker, and incredibly self-deprecating to boot, Turtenwald snapped into game mode. If he made a mistake, it was pointed out. But rather than brush it off, he recognized that the only way he was going to get to that next level was to heed the words of those people he respected and grow as a player. So he did. Each session brooked fewer mistakes, until it reached the point that people were watching him for insight, not to correct. Despite this, he still remains the first person to joke about himself.

"I'm probably the worst person on the team. Actually, it isn't even probably. But I sure am the luckiest," he will candidly say when approached. There are those that say better lucky than good, but Turtenwald has shown that it's probably better to be both.