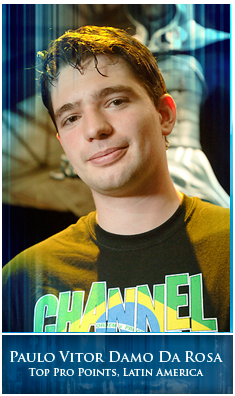 When you think of Magic and South America, one name should always come to mind: Paulo Vitor Damo da Rosa.

Known for always playing the top decks with flawless precision, Damo da Rosa has a record of consistent finishes. He has seen the spotlights of Sunday at the Pro Tour a whopping nine times, and has gone on to finish in the money of most of the Pro Tours that he has attended. The number of times he has finished in the Top 8 is unprecedented when compared to other players—and PVDDR has only played in 31 Pro Tours!

Damo da Rosa is also one of the youngest players to be inducted into the Magic Hall of Fame. He is part of the Class of 2012, and was considered an easy in for voters this year not only for his incredible track record at events, but also for his active involvement in the Magic community as a writer.

Paulo Vitor Damo da Rosa is part of Team ChannelFireball, and shows no signs of slowing down as one of the game's top players.