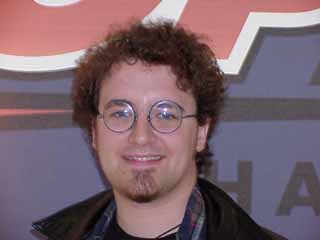 "I first started playing Magic around the time The Dark was released. My friend and I each bought a starter, and we learned the game on our own by reading the rulebook. Afterwards, as we continued to buy Magic, we discovered bigger and better cards, and that got us hooked."

"I thought Fireball was an awesome card. To get a Fireball, I traded away all my dual lands. Dual lands were worthless anyway; I figured I could just put two basic land cards in my deck and they would do the same."

"I was one of the first Magic players in Germany, and I was playing before many of the current 'big name' players. So I didn't have an established Magic community to teach me."

"I prefer Limited over Constructed, although I'm not a big fan of booster draft because of the cheating that goes on. (Teammates who are close together will show each other their cards.) I've also grown to love non-tournament formats: highlander, backdraft, and two-headed giant."

"I really enjoyed the Extended Suicide Green deck which I played in Vienna. It could win on turn three and sometimes outraced the Memory Jar deck. On the first turn, you would try to empty your hand using Elvish Spirit Guides to play Ghazban Ogres and Wild Dogs, and you'd have two or three creatures on the table before you even knew what your opponent was playing. It was called Suicide Green because if your opponent dropped a mountain and Bolted you, he would steal all your creatures."

"I love playing for fun against the guys from Hamburg, where I grew up: Christian Lührs, Patrick Mello, Gunnar Refsdal, Björn Falenski, and also Marco Blume. Sometimes there's alcohol involved, and trashtalking, and this makes the game much more interesting."

"Right now, there are a lot of very good players, so it's hard to name one. If I had to choose, I might pick Kai Budde.""

"Brass Man. I opened one in my first starter and I was impressed by its cool artwork. It was a good card, too. Every time I see a Brass Man, I get sentimental as I remember what the game was like when I first started."

"I've always thought that banding was a great opportunity for smart players to prove their skill. It's a hard mechanic to use, and most people didn't know how to use banding creatures effectively. But if you knew exactly how the ability worked, you could dominate."

"I was really excited when my girlfriend Claudia Loroff won the Female Invitational. I helped her practice, and we worked very hard. I was very proud when she beat Michele Bush in the finals.

I was in a feature match against Mike Long at PT New York 1998. I was totally crushing him, and I had complete control of the game. He kept making small mistakes, forgetting to take damage, drawing extra cards, underpaying mana, etc. At one point, I just said "Calm down, Mike, we're playing Magic here, not Portal." The spectators had a good laugh.

"My two favorite locations have been Vienna and Chicago. Vienna was an incredibly beautiful city. And both places were very central, so you could easily go sightseeing and find good food.

"I was much better at deck building earlier in my career, when I put more effort into Constructed formats. The deck I played at Dallas was a controllish white weenie deck that I invented myself, and I piloted it to a top 8 finish."

"3rd place at PT Mainz. The format for the event was Tempest Rochester Draft, and I practiced a lot beforehand. Eventually, I decided that red-black was the best color combination, so I drafted that throughout the day. It definitely paid off."

"I hardly ever play Magic any more. I used to work at a store that ran Magic tournaments, so I was working with Magic players 20-30 hours a week. And of course, in my spare time, I played Magic as well. This made me into a good player, but now that I don't practice in my spare time, it's much harder to be successful."

"My team, Istari Berlin, is sponsored by Kartefakt, the only remaining card magazine in Germany. It includes Claudia Loroff, Daniel Brickwell, Dirk Hein, and a few others. We meet once a week."

"I think the introduction of the Pro Tour and the money events was definitely the biggest step for Magic. People now playtest and play more often; the game has become very professional. I suppose I liked it back in the old days, when it was more casual and friendly, but I think that a lot of people are served better by this new atmosphere."

"I don't play Magic as seriously as I did two years ago. Recently someone called me an 'old timer' in a tournament report. People know my successes and they know my errors, but I think I've proved that I can play."

"Roleplaying games, play-by-mail games, studying, hanging out with friends, reading, going to the movies, writing and drawing, and a lot of other stuff."