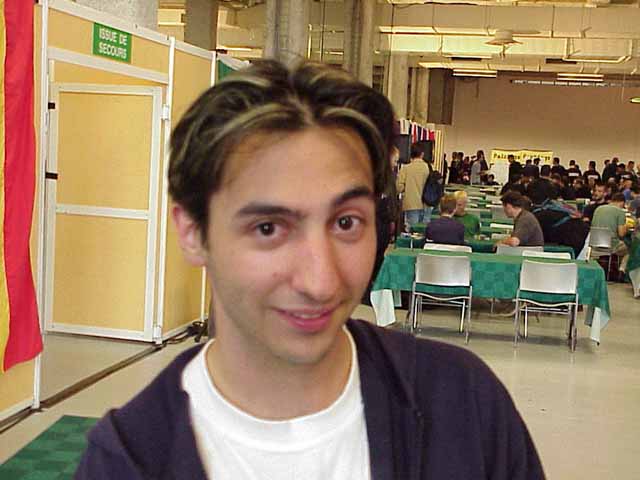 "I was sitting in a bus with a friend of mine, and he told me that he was getting on the bus to buy some cards. I asked him 'what cards' and he explained the game to me. After I learned to play, my first sanctioned tournament was Regionals in 1996, where I qualified for French Nationals. That's how I began playing in major events."

"I picked up the rules pretty quickly. If I made a mistake, I accepted it and didn't try to go back. This made me a much better player."

"I like Booster Draft a lot; I think it's more interesting and more skill-intensive than Standard. Oh, and I also like Extended, because there are a lot of decks you can build. It's the best Constructed format."

"Legion Land Loss was a really original deck when it first came out. It surprised a lot of people. I brought it to GP Madrid, I was playing for fun during the byes. Everybody came around my table and were asking, 'Are you really playing with this? What is this, Kudzu?'"

"I like playing against Marc Hernandez, because all the games we've had have been close, and very interesting."

"Jon Finkel. He has consistently made the best results."

"Survival of the Fittest. It's been in two of the decks that I've had good results with. I also really like the concept of the card."

"I was really excited when my friends on Team Black Ops won the Team Invitational in New York. It was the least famous team of the four, and nobody expected them to win."

"During the quarterfinals of Worlds 1998, I was playing Living Death against Brian Hacker's White Weenie. I was down 0-2, but I made a comeback to win the match 3-2."

"Tokyo was the best. It was so different from all the other Pro Tours; the people there were really kind."

"One of the only decks I've built myself (with a little help) was Legion Land Loss. I'm quite proud of the results."

"My finish at Worlds."

"I am not playing very often right now, because I'm one of the only players in Toulouse who travels to play. This makes it difficult to find people to playtest with."

"When I do playtest, it's with Marc Hernandez and Mike Sochon, who live in Paris."

"The introduction of the team Pro Tour. Team tournaments are incredibly amusing and interesting, because of the interaction between teammates."

"I play Magic slowly, because I like to take time to assess the situation."