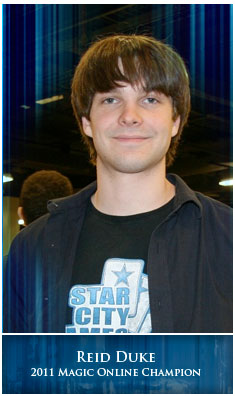 Two years ago "reiderrabbit" was one of the most feared players on Magic Online, but if you mentioned the name Reid Duke to even the most grizzled Magic Online veterans they would have no idea who you were talking about. That's because Duke rarely ventured out to any live Magic tournaments, and instead spent his time on his computer winning Premier Events, and Daily Events under that feared username.

After that weekend, Reid knew that he wanted to get back to the Pro Tour. So he began ratcheting up his Magic Online efforts to the point where he was planning his sleep schedule so he could play in every Online Pro Tour Qualifier. Reid's dedication led to success, and after winning multiple Online PTQs, Reid started making his presence felt at live tournaments as well.

Reid now has three Grand Prix Top 8s and a Magic Online Championship win under his belt. Now it's time to see if all that time put in at Magic Online translates into having what it takes to beat the best players in the world, and add a Players Championship title to his steadily growing resume.