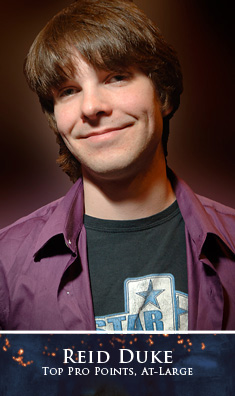 After an incredibly disappointing performance at last year's Players Championship, Reid Duke made it his mission to qualify for this year's World Championship and redeem himself. After a tense Pro Tour Dragon's Maze, Duke found himself in ninth place, good enough to earn him a chance to work out his frustrations from last year on fifteen of the best players in the world.

Originally showing up on the competitive Magic scene as reiderrabbit on Magic Online, Duke was one of the first big Magic Online superstars to successfully make the transition to in-person play. As a Magic Online Championship Series winner and Grand Prix champion, Duke has played at the highest level, and has proven that he is no stranger to success. He's also playing at the top of his game right now, as is evidenced by his recent win at Grand Prix Miami.

This happened to be the same tournament where he stopped his trophy photo shoot to help a random stranger push their stalled car out of the street.

It should be no surprise that Duke is widely regarded as one of the nicest, most liked professional players in the game today. As a member of Team SCG, Duke provides an incredible insight into the game through his weekly article series. As the complete package of skill and personality, there are few people in the game better to learn from than Reid Duke.

What is your favorite Magic deck?
Standard Jund. It has a fantastic late game, and both Huntmaster of the Fells and Thragtusk —two of the best defensive creatures of all time—ensure that you get there.

What's your favorite format and why?
Core Set Sealed Deck. It really boils Magic: The Gathering down to its simplest form. If you truly understand the game and have mastered all of the basic principles, you'll shine, but if you don't, you can't cover it up by drafting well or by copying a winning decklist.

What is your favorite draft format?
Triple Shards of Alara. I loved the number of possibilities. Decks could be two to five colors; games could be fast or slow; and all of the shards were pretty balanced while having their own strengths and weaknesses.

On average, how many hours of Magic do you play each week?
25 hours

Who taught you how to play Magic?
One day my mother Beth brought home two Starter decks, Fourth Edition for me and Ice Age for my brother, Ian. We learned to play together, starting by reading the little rules inserts that came in the packs.

What was the first Magic deck you built?
Sitting on the floor of my room when I was five years old, I innovated some monumental strategies. There was the "Orc Deck," where every card besides Mountain had to have the word "Orc" on it. Then there was the brutal combo of Weakness plus Transmutation , which could kill Ian's 2/2 creatures! But the first deck that I started to bring to tournaments was White Weenie, which was actually good and was the only deck I played for almost a decade.

At which local game store have you've played the most Magic?
Growing up I played at S and J's Comics and Cards (which later changed to Winn Comics). I think I spent as much time at that store as I spent at school! Sadly, when I went off to college, Winn Comics closed down (I guess maybe I had made up the bulk of their business). Now I play at Toywiz in Nanuet, NY.

What's your biggest edge going into the World Championship?
Dedication and discipline. This might make me sound like I'm some stoic secluding myself, practicing for the tournament, and never having any fun, but that's not really the case. It's easy to be dedicated to something you love, and I enjoy preparing for tournaments maybe more than anybody else I know.I feel that I have an excellent process for building decks. I may not be the most original in terms of coming up with wild ideas, but I know how to find a deck I like, learn it inside and out, and tune it until every card is perfect for the job I need it to do.

Who or what is your nemesis?
Shahar Shenhar

Where is your favorite place Magic has taken you?
Favorite Country: Japan. Favorite City: Amsterdam.

What does Magic mean to you?
Magic brings out the best in me. I don't know where I'd be without it.

We're going out for food. What do you want to eat?
I want to try the local specialty. It's all about variety!

What do you enjoy doing when you're not playing Magic?
I enjoy the Outdoors, other games and sports, and reading books.

And finally...rock, paper, or scissors?
I thought there weren't going to be any strategy questions in this interview!