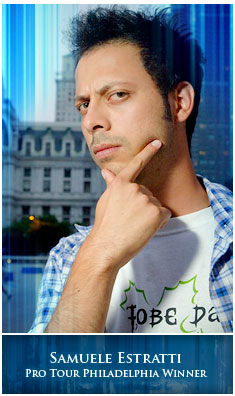 Even in a game like Magic that is constantly shifting and raising the bar, the game has only so many firsts. The first World Champion (Zak Dolan), the first Pro Tour Champion (Michael Loconto) and the first Player of the Year (Olle Råde) are forever part of Magic's history. Thanks to his victory at Pro Tour Philadelphia, Samuele Estratti has secured his own place among Magic's firsts as the first winner of a Pro Tour featuring the newly created Modern format, cutting a swath through the competition with his take on Splinter Twin.

It wasn't, however, Estratti's first dog and pony show. Estratti has represented Italy on the national team twice now, including this year as the nation's top pro at the World Magic Cup. He currently stands third on Italy's all-time Pro Points list with 113, but could easily move into second place this season with just 17 additional Pro Points. He has a ways to go to catch Antonio De Rosa's 269 lifetime points, but at just 25 years old, there's little doubt Estratti is capable of doing just that. And a win this weekend would give him another incredible first—first winner of the Magic Players Championship.