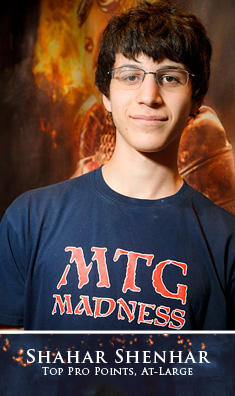 The youngest player invited to the 2013 Magic World Championship, Shahar Shenhar has an incredibly bright future ahead of him if the results of his fairly young career are anything to judge by. Of all of the players invited to the World Championship, Shenhar has the highest career win percentage. He has a trio of Grand Prix wins already in his career, all earned with only five Grand Prix Top 8s. He has one of the highest median finishes of any player in the game, and all of this has happened before his 20th birthday!

Playing competitive Magic since the first time he held a card, Shenhar has moved quickly up through the professional ranks. Now traveling full time for Magic, it is rare to attend a Grand Prix these days and not see Shenhar in attendance. In fact, he has spent more time traveling for Magic than at his home in Israel over the last year.

This diligence has paid off though, as recently as Grand Prix Houston, where Shenhar made it look easy, defeating even the mighty Hall of Famer Shuhei Nakamura on his way to the title. Thanks to his success, Shenhar has fallen in and become good friends with many of the other top pros in the game today. This is a busy weekend for him, as he will be doing his part to represent Israel as the top player in the country in the World Magic Cup as well. Still, if Shenhar has proven anything, he can handle the pressure despite his young age.

What is your favorite Magic card?
Snapcaster Mage

What is your favorite Magic deck?
Blue-Black Faeries

Who is your favorite Magic player to watch?
Jun'ya Iyanaga

What's your favorite format and why?
Standard, because it constantly changes.

What is your favorite draft format?
Any Core Sets like Magic 2012 or Magic 2013.

On average, how many hours of Magic do you play each week?
Over 35 hours, including the Grand Prix events I play every other week.

Who taught you how to play Magic?
Family, and close friends during shabat.

What was the first Magic deck you built?
Mono Black in Vintage. One more players was needed for an event so everyone chipped in for me to play a horrible deck. I thought it would be fun but Luis-Scott Vargas crushed me with his real Vintage deck.

At which local game store have you've played the most Magic?
AdventuresOn in Sacramento.

What's your biggest edge going into the World Championship?
I did a lot of drafts and I'm confident in my Constructed decks.

Who or what is your nemesis?
Sleep

Where is your favorite place Magic has taken you?
Amsterdam

What does Magic mean to you?
Magic is my job, and so many of my friends come from this game.

We're going out for food. What do you want to eat?
Pizza

What do you enjoy doing when you're not playing Magic?
Playing sports and hanging with friends.

And finally... rock, paper, or scissors?
Always rock, not close!