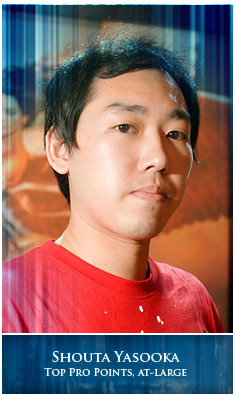 Known by many of the big names in the Magic community as one of the game's most underrated players, Shouta Yasooka has been playing the game at the Pro Tour level for over a decade, and has a variety of titles that showcase his understanding of the game.

While Yasooka is one of the few players who have earned the coveted Player of the Year title, he only has one Pro Tour win (from a team event) and one Grand Prix win. But when you look deeper, you'll find that the Japanese player has plenty of high-level finishes to back up his record.

Yasooka is known for his creative deck-building, and is specifically famous for his blue control decks. Often remembered for running unusual blue control decks at the major events, Yasooka's off-the-wall card choices and solid play have let him pilot his own creations to success on multiple occasions. The Japanese pro continues to play what he knows on the Pro Tour, and it continues to serve him well.