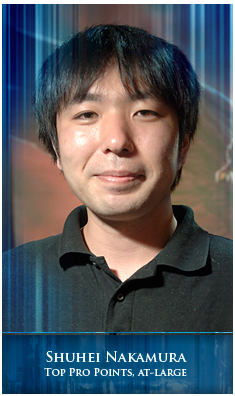 There are few players in the world who can match Shuhei Nakamura's dedication to the game of Magic or his skill slinging spells. The Japanese Hall of Famer is a true world traveler with 18 Grand Prix Top 8s on three continents in basically every format known to man. The 2008 Player of the Year has more than 400 lifetime Pro Points and is a constant presence at Magic events worldwide—even when not competing.

As the second Japanese player elected to the Hall of Fame, Nakamura has served as one of Japan's ambassadors to the world racking up frequent flier miles as a true road warrior. As part of the American-based Team Channelfireball, he'd have to be, and he's one of the few writers who speak to both Japanese and English-speaking audiences.

The one hole remaining in Nakamura's otherwise rarified resume—which includes three Grand Prix wins and five Pro Tour Top 8s as well as his Player of the Year trophy—is a win at a Pro Tour. However, as one of the at-large invitees to the inaugural Players Championship, a win from Nakamura this week would add considerably to his already sizeable legend.