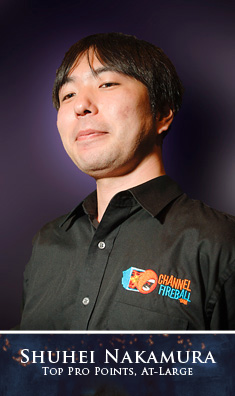 There are many ways to describe Shuhei Nakamura, each applying equally well. One of the longest-tenured professional players, Nakamura has been not only playing Magic but traveling the world for Magic since the game was released in Japan.

As a true world traveler, it is always more of a surprise when Nakamura skips an event on the far side of the globe than shows up at one. It is not uncommon to see him participating in a Japanese Grand Prix one weekend, a North American one the next, and a European one the following week. All of this travel has brought Nakamura friends across the globe and made him one of the most recognizable players in the game.

What's even more insane than the sheer amount of traveling that Nakamura does for the game is the fact that he has been performing at the highest level without a drop-off for the entirety of his career. That's over a decade of consistency, and his recent Grand Prix performances prove that he shows no signs of letting up. The only thing that could prevent Nakamura from having a good year would be if he decided not to play anymore, which seems increasingly less likely with each passing year.

While other Japanese stars have risen over the past decade, they do so based on the foundation built by players like Shuhei Nakamura. Showing the Japanese community what the game can provide you and living a life of exploration, Nakamura has been one of the best ambassadors that Magic could ask for.

What is your favorite Magic card?
Jace, the Mind Sculptor

What is your favorite Magic deck?
Survival of the Fittest

Who is your favorite Magic player to watch?
Kai Budde

What's your favorite format and why?
Limited, especially Booster Draft.

What is your favorite draft format?
Team Rochester. It is really skill testing.

On average, how many hours of Magic do you play each week?
24 hours a day, 7 days a week.

Who taught you how to play Magic?
Myself. No one knew about Magic when I learned.

What was the first Magic deck you built?
Random cards, including Dakkon Blackblade , Dance of Many , and the Elder Dragon legends.

At which local game store have you've played the most Magic?
Adept, a game store in Osaka.

What's your biggest edge going into the World Championship?
The most important edge is my lifestyle.

Who or what is your nemesis?
Yuuya Watanabe.

Where is your favorite place Magic has taken you?
Rome or Athens... and Las Vegas.

What does Magic mean to you?
Life. I hope so.

We're going out for food. What do you want to eat?
I want to eat some special country food.

What do you enjoy doing when you're not playing Magic?
Traveling, reading books, watching movies.