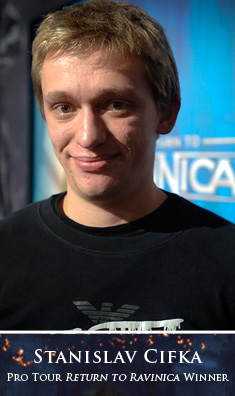 When Stanislav Cifka burst onto the Professional Magic scene with a win at Pro Tour Return to Ravnica, it was a relative surprise, especially considering he had to dispatch Yuuya Watanabe to do so.

Well, let's clarify that. It was surprising if you didn't happen to be a Czech Magic player. Perhaps the only thing that surprised the Czech players in attendance was how well Cifka managed the Limited rounds of the tournament.

"It has become a game for us to watch Stan's draft viewers and try to guess what he's going to pick," Czech superstar Martin Juza has joked. "We are not often right."

Still, you can't argue with results. A top-ranked chess player, Cifka took his Pro Tour down with his favorite deck, one that played incredibly well to his highly analytical nature: Eggs. Piloting the deck with expert skill, Cifka made it look easy as he deftly wove his way through seemingly impossible situations time and again throughout the tournament.

Approaching Magic the same way he did chess, Cifka puts in time and effort, often upwards of forty hours a week playing the game. It is this devotion and dedication to being a professional that has allowed Cifka to attain his success, and his participation with the other members of the Czech and Slovakian teams has certainly helped them in this past year as well.

What is your favorite Magic card?
Mindslaver

What is your favorite Magic deck?
Eggs

What's your favorite format and why?
Any time when there is a first tournament in a current Constructed format because there is a lot of space for innovation, like the first Modern tournament at Pro Tour Philadelphia 2011.

What is your favorite draft format?
Core sets (Magic 2013 was the best).

On average, how many hours of Magic do you play each week?
50 hours.

What was the first Magic deck you built?
Green-white with Dueling Grounds and Kor Haven .

At which local game store have you've played the most Magic?
I've never played FNMs or this type of tournaments and I've never visited some store on regular base.

What's your biggest edge going into the World Championship?
I feel our team did a great job during testing for this tournament, so I believe my edge will be that I'm very well prepared.

Who or what is your nemesis?
After Pro Tour Avacyn Restored, I'm really scared playing against Jon Finkel, but luckily for me he's not playing this weekend.

Where is your favorite place Magic has taken you?
Honolulu.

What does Magic mean to you?
Magic has allowed me to meet many interesting people. It has taken me to places I would never see, it has brought me a great deal of fun, and it's currently my job as well. The simple answer is this: Magic means everything to me.

We're going out for food. What do you want to eat?
Cheese pizza

What do you enjoy doing when you're not playing Magic?
Playing other games, especially chess.