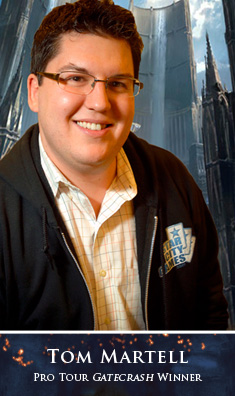 Perhaps the best scarf ever to win a Pro Tour, Tom Martell has undergone an evolution in the past few years. Though he has been around Magic for quite some time, Martell has never seen the level of success that he has over the past trio of years. Despite struggling with a full-time career as a lawyer that often requires well over forty hours a week of work, Martell has managed to elevate his game to the point where he has a three-year median finish of 16th place at the Pro Tour, an absolutely unheard of number. This culminated with his win at Pro Tour Gatecrash earlier this year, a tournament that Martell was incredibly emotional to have won, feeling vindicated.

Most notably associated with the card Lingering Souls (he even has a Spirit token commissioned in his likeness), Martell has used the powerful token generator to destroy tournaments across multiple formats from Modern to Standard to Limited, making it no surprise that it's one of his favorite cards.

Martell has frequently commented that he loves Magic for both the intellectual challenge it provides, as well as the social aspects of the game. Having made many great friends during his time playing, Martell keeps making trips to major events, often with less practice than would make him comfortable, to give him more chances to visit with friends. Even without the ability to dedicate his full attention to the game, it is clear from his median finish that Martell is not only on top of his game right now, but the game as a whole as well.

What is your favorite Magic card?
The easy answer here is Lingering Souls . They have certainly treated me well and I love that the card lets me play both defensively and aggressively as the circumstances dictate. I love the elegance and subtlety of Brainstorm . Aggressive Brainstorm ing can lock you into bad draw steps for several turns and the small decisions you make on what to put back and what to keep can massively change the outcome of a game. Finally, I love Jace, the Mind Sculptor as he has all of the subtlety of Brainstorm with the power of a Howitzer.

What is your favorite Magic deck?
Either Esper Stoneblade in Legacy or the Spirit Delver deck I played in Pro Tour Dark Ascension. Both decks are tremendously good at playing defensively and then suddenly pivoting and ending the game quickly.

Who is your favorite Magic player to watch?
I love watching old videos of Jon Finkel. He has great technical play and the ability to look ahead and understand what strategic goals he wants to pursue in a given game.

What's your favorite format and why?
Legacy – the cards are very powerful but there are enough strong answers that the format is highly interactive.

What is your favorite draft format?
Triple Innistrad immediately comes to mind; I loved the Spider Spawning deck more than was healthy for me.

On average, how many hours of Magic do you play each week?
This varies tremendously based on work and if there is an event coming up; I'd say when not preparing for a tournament I play between 3 and 10 hours a week. If there is something especially fun on Magic Online like Cube or Modern Masters, or if I manage to find time to stream, this goes up a lot. I never play in dailies or grind QPs so I don't play just to play.

Who taught you how to play Magic?
I think I was largely self-taught from reading the rulebook. I was at a summer camp and one of my friends showed up with a starter deck of Unlimited. I'd been playing chess semi-competitively for about a year and loved games so I was immediately drawn to it. I was an only child and as a kid I didn't have any friends from school who played. I remember building a bunch of decks and having tournaments playing against myself in my living room. It was a nice break from chess studying.

What was the first Magic deck you built?
I don't have a strong memory of a specific deck that I built. I had a dozen decks built at any time when I started playing and would play them against each other, tweaking them constantly.

At which local game store have you've played the most Magic?
There are three stores I played at historically: Who's On First in Hayward, Games of Berkeley, and C &; J's Collectibles in Fremont. It is probably split pretty evenly between them.

What's your biggest edge going into the World Championship?
I think I'm playing extremely well right now and I play my best magic when I'm playing against tough opposition. I really love the intellectual challenge so having the best in the world sitting across from me brings out my competitiveness.

Who or what is your nemesis?
Historically my nemesis has been tilting. I used to get very frustrated at losing to forces outside of my control (mana screw, etc.) and it would result in some poor play in subsequent rounds. I spent a long time working through this on my own, doing some pretty intense self-reflection, and it has improved a lot. Another issue I've had is getting tired later in tournaments. I really let myself get in terrible shape over the past few years and my stamina is not what it used to be. This is one of the reasons why I started taking my health and fitness very seriously over the last few months. Within Magic my nemesis is clearing Ben Stark – I am 0 and 6 against him. So far I've only played against him in the winter, which certainly favors House Stark. Now that we may face each other in the summer, I think House Martell's desert home will let me break the streak.

Where is your favorite place Magic has taken you?
I've never actually left the US except for going to Pro Tours. I love traveling so each of the trips has been incredible. My favorite city that I've been to is Barcelona – it was a great city to just wander around and experience. I also really enjoyed going to Japan for the first time; it was a bit of a culture shock but I really loved being exposed to such a different environment.

What does Magic mean to you?
Magic represents two very different things in my life. First, it is a tremendous social experience. I've met most of my best friends through the game and getting to experience the world with them, meeting up in a different city every few weeks, is indescribably cool. I don't know where I would be without Magic affording me the opportunity to get to know so many truly exceptional people. Second, Magic is a great intellectual challenge. I have always loved games and the chance to challenge myself to be the best. While individual games of Magic certainly has a lot of variance, Magic has the potential to be so demanding and rewarding. I believe Ben Stark once said in an interview that he wished there were no games decided by mana screw or variance because it lessens the game for him. If you asked me while playing for Top 8 of a Pro Tour I might change my answer, but I generally agree with him. I want to throw my best against my opponent's best and see who can outmaneuver the other.

We're going out for food. What do you want to eat?
I am a very open minded eater; I'll try basically anything. My favorite go-to cuisines are Thai, Japanese, and BBQ.

What do you enjoy doing when you're not playing Magic?
I still have fun playing chess, though at times it is hard seeing how much worse I am than I used to be as I am still hyper-competitive. I play lots of other board games with friends. Also, I've started playing a ton of basketball again and one of my favorite parts of Pro Tours are the Sunday games after we are all done with the tournament.

And finally... rock, paper, or scissors?
Nothing beats rock!