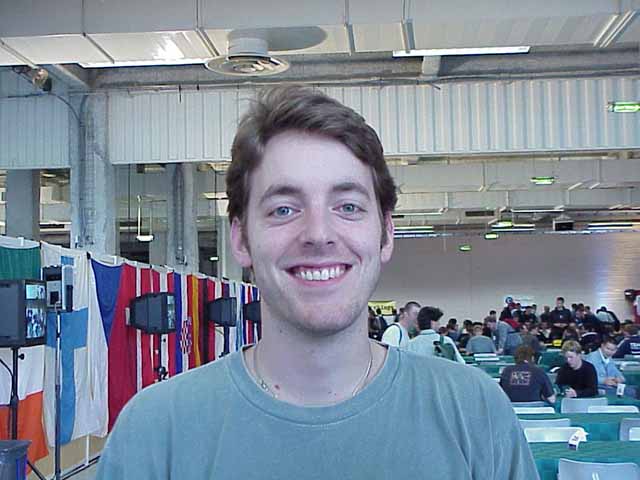 "My friends at the university bought Sealed Decks, and brought them out in the middle of class. We had a rule that if you bought a booster pack, you had to buy one for everybody else. You'd be reimbursed, of course, but it kept everyone from increasing their collection over others.

"When we started in Revised, we thought Craw Wurm was the best card except for maybe Shivan Dragon. We never played with Armageddon and Wrath of God because they killed your own cards. Then I went home and played in tournaments, and that changed everything."

"I playtested with Régis Lavouisier and Geoffrey Kretz in France, and when I came back I tested with Jon Willis. That's when I qualified for Pro Tour Paris."

"I love formats where there's one clearly dominant deck that I can heavily metagame against. In Saga block booster draft, I would draft an aggressive red/green deck while everybody else fought for the superior black cards. And I did the same thing in Extended, finding the best deck to combat the dominant Trix."

"I loved the 'Derelor deck' which I used to qualify for Pro Tour Paris. It had Ernhams, Geddons, Birds, Swords to Plowshares, Strip Mines, Lightning Bolts, and Elvish Archers. It was a five color monstrosity, and I thought it was house."

"Hmm� well, I particularly enjoyed beating Gary Wise at Worlds. He had said a lot of negative stuff about me on the net, and we ended up in the same pod during the Rochester Draft. Going in to the fifth Saga pack, I was clearly playing mono-red, and he was playing white. I should have gotten a fourth pick Shiv's Embrace, but he took it away from me and went white-red. I got paired up against him and I crushed him."

"It's gotta be Finkel. After US Nationals, just based on his results, he's absolutely dominating."

"Swords to Plowshares. You gotta play that kind of cheap removal in every deck that it's legal in. It seems that it's always good. You can't go wrong with Disenchant either. Oh, and I really love Wild Dogs and Albino Troll."

"I think it's the Rebel/Mercenary recruiting thing. That's just insane. Lin Sivvi would already be really really good even if she just put the card into your hand. But she puts it into play. It's no wonder the card's banned in Block constructed."

"In the third game of the finals against Mark Shick in GP San Francisco, I was actually able to kill a Morphling. At the end of his turn, I Expunged it, and he paid to give it protection, and then I Befouled it during my turn to win the event."

"Paris. I guess I've always liked France. I thought it was a little poetic that I practiced for a year in France, and then once I got home I immediately qualified to go back there for PT Paris."

"I helped build Three-Deuce for PT Chicago. We wanted something that was versatile and aggressive. Something with a fast beatdown with Wild Dogs and Boas, but with a few Miners, Disenchants, and Bolts. We just wanted green jank, basically, because we thought white jank sucked."

"Winning Grand Prix Philly. Some of my friends had tweaked the Three-Deuce deck for qualifiers, and with a few changes of my own, the deck was great for the metagame. It was a very flexible deck."

"I really only play when there's a major event coming up, like a Pro Tour. When I lived in Louisville, there wasn't anyone to play against."

"Over my life, the people I've played with most are Régis Lavouisier and Geoffrey Kretz, and I've grown the most by playing against them. I've also tested a lot with David Weitz and company, in Ohio."

"It's gotta be this Masters series thing. It's set up to allow thirty to fifty people actually make a reasonable income playing the game. The competition level should rise, and I know a lot of people who are coming back in because of this extra money."

"I'm definitely a rules lawyer, and I guess I've always been picked on for that. Also, some of the Americans think that I'm sort of anti-social, because I don't get along with them. I always get along with the Europeans... but I have some friends who I want to play with but not to hang out with. I mean, I don't care who's the best Magic player, that doesn't mean I want to go out and drink with them."