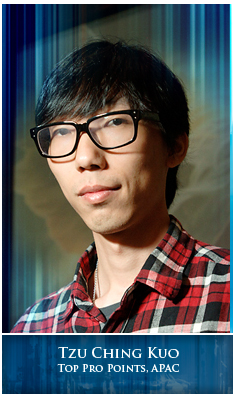 Less than a month ago, it would be surprising if Tzu-Ching Kuo wasn't the least-recognized name on the list of invited players, at least for the majority of readers. Prior to the World Magic Cup, he hadn't done anything except play on the Pro Tour nearly two dozen times, rack up over 150 Pro points, Top 8 eight Grand Prix, and make back-to-back Team Top 4s.

Now, after captaining Team Chinese Taipei to a victory at the inaugural World Magic Cup, Kuo's name is getting a bit more circulation. All weekend at that event, you could see other professional players walking by the feature match area, watching Kuo play, and commenting "Who is that? Whoever he is...he is good." Now, the who is less of a worry.

The World Magic Cup gave Kuo a chance to finally get recognition for the incredibly broad body of work that he has produced. The Players Championship is a chance for him to get some vindication, to show the Magic world as a whole that they should have taken notice of him long ago, that he is Tzu-Ching Kuo, long established Pro, captain of the current World Champion Team, a force to be reckoned with. If you like to root for players that deserve more respect than they've gotten, diamonds in the rough, no one in the field glitters quite the way that Kuo does.