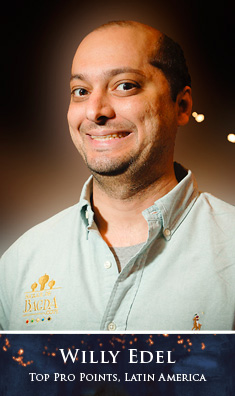 For the longest time, Willy Edel has occupied most people's minds as "the other guy from Brazil" alongside Paulo Vitor Damo da Rosa. After this year, that may no longer be the case.

Edel has been on an absolute tear over the past season, reminding people of what a great player he is, and lending a tremendous amount of credence to his Hall of Fame bid for this year. Between his Pro Tour Top 8 at Pro Tour Return to Ravnica and his win at Grand Prix Toronto, not to mention the bevy of Top 16s, Top 32s, and Top 64s he has been able to accrue in the process, Edel was able to unseat perennial Latin American representative and Hall of Famer Paulo Vitor Damo da Rosa and secure himself a spot at the World Championship.

An impossible to overlook aspect of Edel's career is the role he has served for the up-and-coming professional players from his native Brazil. It can be incredibly difficult as a Latin American player to get enough support to attend Pro Tours, even after qualifying. Edel has been one of the pillars of the Brazilian Magic community, offering his services as a longtime Pro to help newer Brazilian players make the most of their qualifications, helping to give Brazilian Magic a spotlight and a leg up, making things that much better for generations to come.

What is your favorite Magic card?
Bloodbraid Elf

What is your favorite Magic deck?
Jund

What's your favorite format and why?
Unified Team Constructed (any). I love Constructed and playing with a team and with the additional challenge of building 3 different decks is awesome.

What is your favorite draft format?
Modern Masters

On average, how many hours of Magic do you play each week?
If I have any tournament to play in the next two weeks, around 50. If not, around 20.

Who taught you how to play Magic?
I was taught by a friend a long time ago. His name is Julio, I haven't heard anything of him for at least 10 years. He would be surprised where I am right now for sure. It was when Fourth Edition was released in Portuguese, 1995 or 1996.

What was the first Magic deck you built?
A white weenie with 4 Reverse Damage and 4 Eye for an Eye .

At which local game store have you've played the most Magic?
Cult and Comics in Rio de Janeiro (til 2000's). Currently I play at Point HQ Ipanema in Rio as well.

What's your biggest edge going into the World Championship?
Being an underdog and I'm used to testing/training by myself. Mostly people always work with big teams and for this one usually you won't have the same team you usually have for Pro Tour (considering you even have a team for the World Championship).

Who or what is your nemesis?
N/A

Where is your favorite place Magic has taken you?
Thailand. It is so different from everywhere else I've ever been. The people, the culture, the food, its hard to explain with words.

What does Magic mean to you?
Right now it's a big part of my life. It's my favorite game, my hobby, my business (I own a store) and it gave me the opportunity to visit places and make friends all around the world. If there is anything else that can give all this to someone, I would like to know what it is.

We're going out for food. What do you want to eat?
White Rice + Black Beans + any meat.

What do you enjoy doing when you're not playing Magic?
I travel so much that I really like the time I spend home with my wife and my three dogs. I love the simple things such as walking with my dogs, having a special dinner, or watching a good movie.