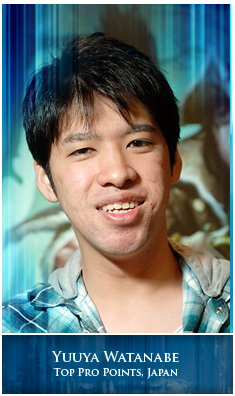 Aside from those accomplishments, there may not be anything that emphasizes how important Yuuya Watanabe is to the Japanese Magic community and the global community as a whole than the following story.

There are two great ways to identify Watanabe in a crowd: the grin that appears on his face every time he isn't deep in thought in a match, and his black and turquoise checkered jacket. Since there is always the chance that he might be in the middle of a match, the first one is a little unreliable. Turns out the second may not be as reliable either, as the recent Japanese Grand Prix displayed.

As a writer was looking to grab Watanabe for a quick interview, he took the visual shortcut to start walking toward that tell-tale jacket as soon as it was spotted. When the writer arrives, it isn't Watanabe sitting in the jacket, it's someone completely different. A bit confused, the search began again. This time, the jacket (and its wearer) was spotted getting ready to walk out of the door, going for a bit of fresh air. But once again, it was a Yuuya doppelganger. Yet another jacket was spotted near the feature match area, but once again that wasn't him ... but it was someone watching the real Yuuya finishing up his match!

The adoration and respect for Watanabe from the Japanese community is obvious, and he clearly deserves the adulation. His accomplishments in Magic often overshadow Watanabe's personality as an incredibly funny, very likable guy who never shies away from an interview, even knowing that his English isn't the best. He loves telling stories and acting out funny moments from his weekend. He just happens to win Grand Prix titles while he's doing it. And the Japanese love him for it, enough to emulate his trademark fashion. If more people could get past the statistics, they'd realize that he's more than just a great player. He's also a great guy.