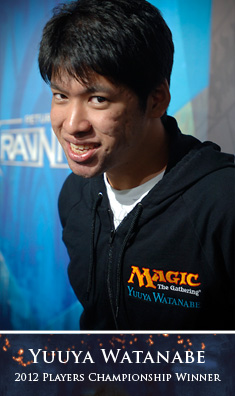 There is very little that Yuuya Watanabe has left to accomplish in his relatively young Magic career.

From his debut as a Rookie of the Year in 2007, he has amassed an incredible number of impressive finishes, including an amazing four Grand Prix titles in an eleven month span and a stretch of five Top 8s across a stretch of six Grand Prix events. He has been a Player of the Year twice. He has represented Japan at the World Championships. He even comes into this event as the defending champion, having taken fellow Japanese countryman Shouta Yasooka out in the finals of last year's Players Championship. The only title that has really eluded him is that of Pro Tour Champion, a mark he narrowly missed as he finished second to Stanislav Cifka at Pro Tour Return to Ravnica earlier this season.

Still, Watanabe is such a strong player that he is always a threat to win any event that he enters. No player is chosen as an early favorite to win an event as much as Watanabe, even in a field as stacked as the one here at the 2013 Magic World Championship. His dominance throughout his career has been nothing short of incredible, racking up an impressive 65% win percentage over the course of his career. He is utterly terrifying to sit across the table from, yet he is also one of the nicest players on the Pro Tour today. Always quick with a massive smile and laugh, Watanabe is a paragon of what Magic players should strive to be, a champion on all fronts.

What is your favorite Magic card?
Ponder

What is your favorite Magic deck?
Blue-White Delver

What's your favorite format and why?
Booster Draft.

What is your favorite draft format?
Zendikar. So many Grand Prix Top 8s!

On average, how many hours of Magic do you play each week?
Maybe 4-5 hours.

Who taught you how to play Magic?
I taught myself.

What was the first Magic deck you built?
Blue-White-Red Lightning Angel control.

At which local game store have you've played the most Magic?
JPN Local, Card Tim, and Hobby Station.

What's your biggest edge going into the World Championship?
This tournament is only very strong players! I just want to enjoy the highest level game.

Who or what is your nemesis?
Shuuhei Nakamura

Where is your favorite place Magic has taken you?
Seattle

What does Magic mean to you?
Eat, sleep, Magic.

We're going out for food. What do you want to eat?
Sushi

What do you enjoy doing when you're not playing Magic?
Watching Japanese animation.

And finally... rock, paper, or scissors?
Scissors, the victory sign.