Player of the Year: Owen Turtenwald

One can only imagine how Owen Turtenwald must have felt as the quarterfinals began Sunday. He started the year in second place in the Player of the Year race. After the next event, he was in first, and he never looked back. For the entire year, he had been the very model of consistency, performing at an incredibly high level and putting up top finish after top finish. The Player of the Year title seemed to be his to win.

And at Worlds, things started to slip away.

While he had been showing an utter dominance all year long, the places behind him were filled with friends and teammates, nipping at his heels, never giving him a chance to rest. Sitting on the outside looking in, as four of his teammates, three of whom were in the Player of the Year hunt, sat to face their opponents for the title of World Champion, it had to be a bittersweet feeling.

"I really hated that I even had to consider rooting against my friends at the end of the year. I mean, it's tough wanting to win something yourself but knowing that to do so costs them. Thankfully, we're all a good team and good friends. After LSV, PV, and Josh Utter-Leyton lost their matches, they were definitely bummed, but they were still happy for me."

And what a team performance it was. Four players in the Top 8, virtually the entire Player of the Year Top 8, and the one of the most dominant single-player performances of all time, ChannelFireball can chalk this year up as a success, and Turtenwald gives all of the credit for his success to them.

"I was about to quit last year. After playing as much as I did and performing so poorly, I just didn't want to do it anymore. The reward for the amount of effort I was putting up just wasn't there. But these guys gave me a good group to work with, and all of the tools I needed to succeed. They'd watch me play, and talk to me about the things I was doing wrong, first to make fun of me, obviously, but definitely to help me. They cared a lot that I did well, and that really helped me to get better. There is no way that I am able to do anything close to what I did without their support. They're the best team a guy can hope for."

With his stomach finally able to come out of his throat, Turtenwald was able to finally breathe a sigh of bittersweet relief.

"It feels great, just awesome. I mean, you can really put anything you want there. It just feels amazing."

While his victory is tinged with a touch of sadness at his teammates inability to take the World title, I'm sure that they are just as happy for him as he is himself. After all, what are teammates, and friends, for? 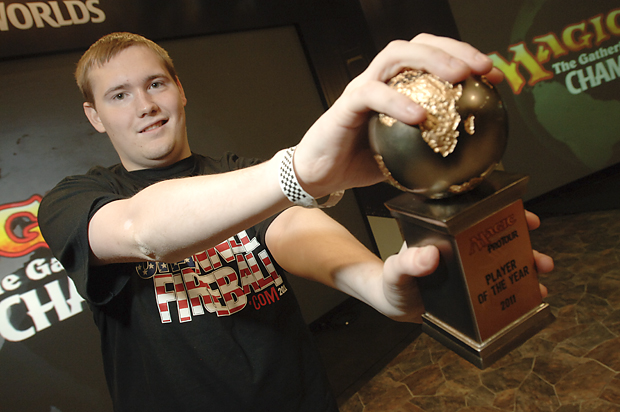 Congratulations to Owen Turtenwald, your 2011 Player of the Year!