Player of the Year: Tomoharu Saito 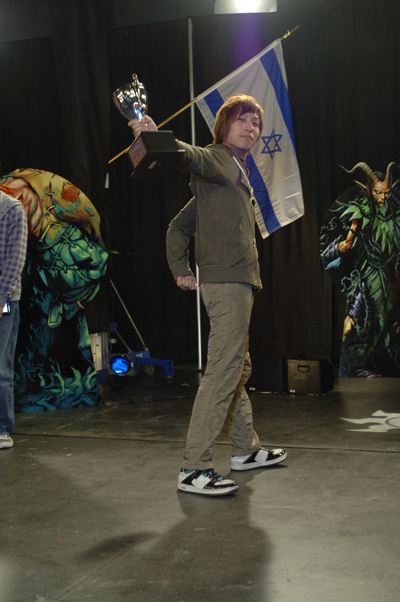 Tomoharu Saito claims the 2007 Player of the Year race.

Tomoharu Saito is one of the strong Japanese players who has made that country such a dominating force over the past few years on the Pro Tour, but one thing he hadn’t done was follow countrymen Kenji Tsumura and Shouta Yasooka into the elite club of players who have called themselves “Player of the Year.” That all changed this season as the Pro Tour–Charleston champion capped a strong 2007 season at the World Championships held in New York City.

That doesn’t mean the race wasn’t tight, however. Some dozen players had at least an outside shot at taking the title coming into the weekend, though most of them needed “something bad” to happen to Saito to pull it off. In that arena, unlike most of the rest in his life, he managed to disappoint, finishing a respectable 37th. Was the player excited about the honor?

“YES!” He replied enthusiastically before continuing, “of course!” and flashing a huge grin and two thumbs up. Would he be taking advantage of the perks, though they didn’t necessarily represent a huge upgrade from his status as a Level 6 on the pro scale?

Saito has seen a fair amount of success over the season. A Top 8 in Yokohama gave him the bulk of his Pro Points, though he also managed to win at Grand Prix–Strasbourg and Top 8 Grand Prix–Singapore. Consistent money finishes don’t hurt either, nor does living in close proximity to 2005 Player of the Year Kenji Tsumura, who was one of Saito’s staunchest competitors headed down the home stretch this season.

Still, facing such strong competition didn’t seem to faze Tomoharu. “Before the season I told all my friends: ‘I’ll win PoY!’” Lucky for them they’re not betting fans or Saito might have had a few extra perks to add to the honor of winning the title. Can we expect him to take advantage of the Pro Tour lifestyle by traveling to all the events next year?