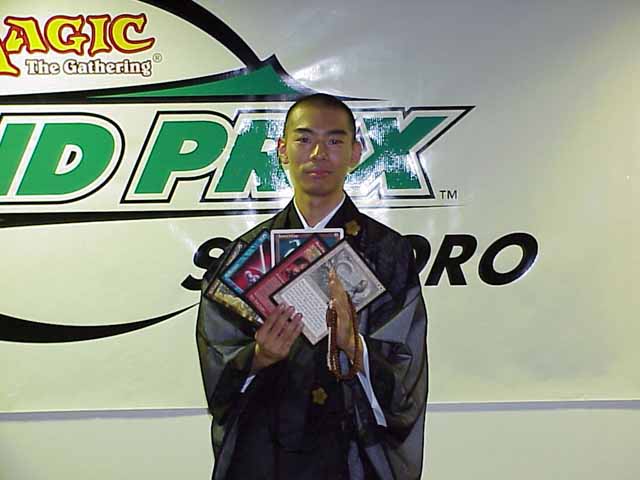 Takamasa is a Buddhist priest in training and will be competing at Grand Prix-Sapporo, his 3rd Grand Prix event.

How did you start playing Magic?

I saw an ad for Magic in Hobby Japan magazine (an Inquest style gaming magazine). It looked interesting, so I purchased an English language 4th Edition Starter and learned the rules. I used a dictionary to translate the English cards. I've now been playing for 5 years

Have you played in any other big Tournaments?

What do you do outside of Magic?

How do other Magic players react to you being a priest?

My opponents are often fearful and intimidated of me. Thankfully there is nothing that says you can't play games in the Buddhist religion.

So how did you decide to become a Priest?

My uncle is a priest and he asked me if I would like to become a priest. I said yes and started going to a Buddhist university. It takes 4 years at the university before I graduate and become a full priest.

What is your favourite Magic set?

Mirage is my favorite set because it has lots of big creatures. My favorite card is Sneak Attack.

How do you expect to perform in Grand Prix Sapporo?

I'm fairly confident for tomorrow and I plan to finish in the money. I like constructed Magic more and generally don't do as well in limited events. Unfortunately, being a priest does not give me time to practice my limited skills.