The Pre-Worlds Diary of Brian Kibler

It's nearly two AM in Atlanta and I'm just waking up. While this wouldn't even phase most of my good friends – especially now that I'm living what my friend and future roommate Gabe Krause recently called "the life of the vagabond gamer" – in this particular case it's not the result of some absurdly distorted sleep schedule or weekend packed with too much partying. No, I'm waking up at two AM Atlanta time because I'm not in Atlanta. Right now I'm on a plane just barely reaching the coast of Europe, an hour or so out from my destination of Amsterdam. 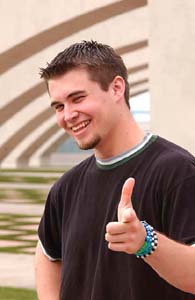 Brian Kibler doesn't always look this goodWhile my Shaggy ala Scooby Doo appearance right now – unkempt hair, unshaven face, tie dye and sandals – might lead those around me to think that I'm going to Amsterdam to partake of some of its notorious freedoms, the reality of the situation is that this flight is the first leg of a three week expedition. Once I land in the most permissive city in the world, the first thing I'm doing is hopping on a train to Eindhoven, where I'm meeting up with Victor van de Brock and the rest of the Dutch to caravan down to Berlin for the World Championships. After worlds, I'm crashing with Vic and company for the next couple weeks until Grand Prix London, to which I'll travel with them, and then finally return to the US on August 26th, just in time for Grand Prix Atlanta and the Southeast Invitational.

Sound crazy? If only that were the least of it. While I'm going to be in Europe, the lease on the apartment I've been living in mine since the beginning of the summer runs out. While I was aware of this eventuality, I didn't exact plan well for it, to say the least, so right now all of my belongings outside of those with me right now are haphazardly packed and just sitting in my old apartment. My friend and other future roommate Brooks Rhodes – of MODO beta fame, sitting at #1 composite in a picture on the back of the box for the Magic Online CD – offered to haul my stuff over to his place and store it for me while I'm gone, as well as put me up upon my return until we actually move in to wherever it is we're going to be living in a month or so. I've already told him I owe him about a hundred drinks for all of his help, but I probably ought to throw in my firstborn child too.

It's funny, really. Most peoples' lives calm down once they graduate college. They get a "real job" and settle into some kind of routine. They wake up at the same time every weekday go to the same place to do the same thing. Weekends mean time off, not crazy parties, and no longer start on Thursday night. This all assumes, of course, that they can find a job – something which I know from my fellow graduates who are sending out hundreds of resumes right now isn't by any means a guarantee in the US economy today. Not that long before graduation, only two of the Seniors in my fraternity had any idea what they were doing with themselves the following year. One was Will Peterman, who was graduating with highest honors in economics and was going to work for a firm in Washington DC who'd been impressed by his thesis work. The other was me. I got a good chuckle at the expense of everyone who'd ever laughed at my philosophy and religion major, I assure you.

So here I am – Brian Kibler, professional gamer – on the first leg of what I've been calling my European Tour. I wouldn't trade what I'm doing for almost anything in the world. Sure, it's a chaotic and unpredictable existence. I don't know when my next paycheck will be or how much it'll be for. I'm hoping it'll come in a few weeks and be for $34,000, but I certainly can't budget for that kind of windfall. I don't even know where I'm living when I get back to Atlanta. Some people might call that kind of uncertainty nerve-wracking. I call it exciting.

One of the biggest questions I get when people learn about what I do is "What do your parents think?" Most people seem to think that my parents would be unhappy that I've ended up playing games for a living after they paid to send me to Emory. Well, a week ago my father instant messaged me to tell me that he'd looked up my Magic winnings online and saw that I've won nearly $52,000 over the past couple years. I think he intended that as some sort of congratulations – me, I just got to thinking where all that money's gone. A bit too much sushi, perhaps?

Then there's my mother. Now, I've mentioned her in previous articles as my #1 fan, and to call her "supportive" of my gaming would be a gross understatement. For years before I ever did anything of note Magic-wise, she always believed me when I told her that I really was actually good at this silly card game and that it really was worth all the time I put into it. Now, most mothers would probably at least humor their children's delusions of grandeur, but I don't know how many would go to lengths to help follow through with them. When I was fifteen, she flew with me to a blizzard-struck New York City to play in the junior division of the very first Pro Tour. That same summer our family vacation was to the exciting destination of Columbus, Ohio, for the Origins gaming convention and US Nationals – for which, amusingly enough, my brother was qualified and I was not. Most well known, though, was her appearance at Grand Prix Boston, which I won. After Tomi Walamies made the finals in Venice with his mom in attendance, it became clear that having one's mother at an event is the most potent strategy available.

Clearly, then, it is merely a good investment that my mother is flying to Berlin to watch me play in Worlds this coming weekend. Never mind taking off work and the summer season airfare to Europe – clearly the expected return from her attendance far exceeds any missed pay or ticket price. I hadn't even touched a Legions card before Boston, and Tomi admitted to playing no more than a dozen games prior to Venice – with the countless hours of playtesting I've done for this event and my number one fan cheering me on from the sidelines rather than online, how could I possibly lose?

Then again, no matter how much things seemed to be stacked in our favor, something can always go wrong. Either though no fault of our own – suffering horrible mana difficulties despite mulliganing properly, or making a fantastic metagame call only to play against the only people playing bad matchups for your deck in the tournament – or of our own accord, like my Mirari blunder last year or the fact that I just missed my connecting train to Eindhoven because I couldn't remember which strange Dutch name was the stop I was supposed to change at. Oops.

Like I said before, though – I'm a gamer, and I love what I do. While haphazardly navigating the Dutch rail system wasn't part of my plan for today, and it's not necessarily the sort of adventure I'm looking for, it's just one of the many strange things that come with the territory. Like caravan road trips down the Autobahn where Jeroen Remie runs out of gas, or late night conversations with Gerard Fabiano in which he tells me he had a dream about me telling him what decks to play in Worlds. Apparently my incarnation as the Ghost of Worlds Future is planning on playing Astral Slide with Cartographer and Auramancer in Standard and Reanimator with Akroma in Extended. I'm not going to say how accurate Gerard's vision was, but keep checking the coverage to see if he's truly a great seer or just another hack like Miss Cleo.

This article is like some kind of time lapse photography, it seems. I've gone from flying in a plane over the Atlantic to missing my train in Holland to sitting around a table in the lobby of the Worlds hotel in Berlin watching Thomas Pannell get knocked out of an online poker tournament on the very first hand. Pretty soon I'm heading to sleep to try to adjust to the time change, though I crashed for the vast majority of both my flight and the drive from Amsterdam. Tomorrow is registration and the competitor's barbeque, along with whatever last minute tech scrambles may come up. Three years ago somehow word had gotten out that my playtest group was playing Tinker, and Chris Benafel – among others – was walking around at the barbeque loudly asking any of us if we had any Pulverizes to trade. Hopefully this year we can manage to keep things a bit better under wraps. That is, of course, assuming no one else has any crazy dreams.

So far, I like my chances. I've gotten in quite a bit of testing over the past month or so, and as long as we didn't make any glaring misevaluations of the metagame in each format, I feel like I should do quite well. Just this evening I did a practice Rochester draft with five Dutchmen, Ben Seck, and Jordan Berkowitz, and Jordan and I exerted American dominance by splitting in the finals. Between that and my countless hours of Magic Online drafting, I'm as confident about a draft format as I think I've ever been. Hopefully this year I'll keep my head and remember to say "Mirari it". Regardless, I'll be sure to regale you all with my tale, be it one of victory or of woe. I'm just hoping this time it's the former. Either way, though, it's sure to be exciting.