By Mike Turian and Zvi Mowshowitz

After 15 rounds, two Invitationalists stood above the fray. Jeff Cunningham and Antoine Ruel staved off Kenji Tsumura's Friday charge to secure their spots in the finals, with card immortality on the line.

Cunningham lost to Ruel in the Block Party format during the Swiss rounds of the Invitational. Cunningham said that in both Games Two and Three he had gotten unlucky and lost a favorable matchup.

Both players kept their opening hand. Ruel started with Lay of the Land while Cunningham had only an Island. Cunningham had Careful Study in his hand but didn't cast it since he had no good cards to discard, a rarity with his Blue-green Madness deck. The block party deck that Cunningham played is the deck that he has become famous for. A second-turn Wild Mongrel was exactly what Cunningham wanted to see. Ruel was playing Domain, his deck focused on getting control with Collective Restraint and Global Ruin. 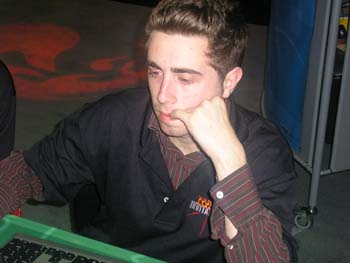 Cunningham thought he had the favored matchup in Block Party.

Cunningham swung over for three on the third turn, pitching a Careful Study. This set up his Circular Logic for one on Ruel's turn-four Collective Restraint.

Cunningham wasted no time getting his beat on. Elephant Guide came down for Cunningham and hit for 5, a good start since he really needed to win quickly against the control deck. Allied Strategies for four got through for Ruel. That was a lot of cards for Ruel, but his life total is quite precarious.

Cunningham considered his options, a Deep Analysis or second Elephant guide would be lethal if he had them. He didn't but a Careful Study has Cunningham discarding Aether Burst and Wonder. The newly flying Mongrel attacked for six, discarding an Arrogant Wurm.

The pressure was on Ruel. Having a full hand, all Ruel could muster was a Lobotomy to look over Cunningham's deck and Game 1 went to the Canadian.

Ruel led Game 2 with a Chromatic Sphere. Jeff had only an Island on the first turn. A second-turn Addle hit Elephant Guide, as Cunningham only had one green card. The rest of the hand was all blue cards and land!

Yet on the top of his deck a Wild Mongrel was hiding! Even though Ruel had gone after the Mongrel with his Addle, he couldn't take it where Cunningham had it stored!

A second Addle on blue took Circular Logic, leaving Jeff with no permission. Ruel didn't have another land however and was stuck on two mana. Control decks always need more than just a couple of lands, usually wanting at least four mana. Jeff's turn saw him play Quiet Speculation to fetch Roar of the Wurm, Deep Analysis and Ray of Revelation. 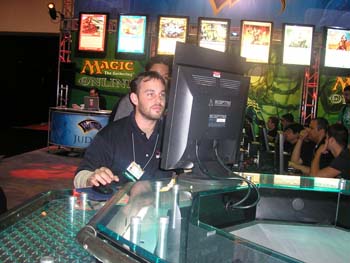 Antoine suffered from low mana in the first match.

Ruel had another turn of no land. Unlike in their Swiss meeting, it seemed as if this time Cunningham had all the luck. A turn-four Roar of the Wurm meant that Ruel needed a land as soon as possible if he were to have any chance.

Ruel found his third land and cast Harrow to fetch a basic Plains and Forest. Cunningham attacked for 10 as he discarded a Forest and Wonder, and after a quick draw, Ruel conceded.

Jeff Cunningham took a 1-0 lead in matches over Antoine Ruel.

After a quick victory in match number one where he had the advantage, Cunningham turned to Duplicate Sealed to try to finish off Antoine Ruel before he could get a chance to use his undefeated – and probably dramatically undervalued – Ink-Eyes deck from the Auction of the Geniuses. Jeff also 3-0'd the Auction format with the dangerous Teysa avatar, but conventional wisdom says that Ruel would have the advantage, making this likely to be the key match of the finals.

Jeff's first hand contained both more land than he would like and two red spells without any Mountains. He agonized over the decision but was forced to go to six and then five cards. His five-card hand contained four Mountains and an Aven Fisher, and Jeff was forced to watch as Antoine started with Words of Wilding and Solemn Simulacrum, with Jeff unable to get any spells other than Chromatic Sphere until his fifth turn.

The Aven Fisher was forced to trade with Solemn Simulacrum and Jeff continued to fall even further behind. Ruel then played Krosan Tusker to present Cunningham with a set of threats he has no realistic answers for. The huge green creatures were quickly lethal against Cunningham's poor draw.

Cunningham was forced to mulligan again in Game 2, but got off to a blistering start off that mulligan with Dimir Guildmage followed by Adamaro, First to Desire. When Jeff played a fourth-turn Solfatara, he put any recovery from Ruel's slow draw all but out of reach and Jeff easily won the second game.

Ruel's draw in Game 3 missed his two-drop but was set to present a series of huge problems for Jeff with a steady stream of powerful creatures. Jeff was forced to spend his first three turns doing nothing but cycling Stun desperately searching for his fourth land. Without it, he could not play his Solemn Simulacrum to stabilize his mana base. Instead, he could only play a Dimir Guildmage who was unable to profitably block either of Ruel's attackers. The fourth land did however arrive on the following turn, but it was too late as Sudden Impact sealed the second match for Ruel, sending the Invitational to the Auction of the Geniuses. 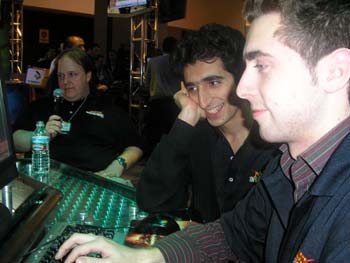 Gabriel Nassif watches on as Cunningham dropped the second match.

Jeff Cunningham and Antoine Ruel were tied at one match apiece.

Match Three: Auction of the Geniuses

The Invitational has come down to a battle of two undefeated Auction decks: Cunningham, playing the Teysa deck designed by Tsuyoshi Fujita, and Ruel playing Chris Pikula's Ink-Eyes deck. Would the spirit of last year's Invitational runner-up power Jeff to victory, or would Antoine be carried by the design of the Invitational winner who brought Meddling Mage into the world?

Cunningham was forced to take a mulligan in Game 1, meaning that after Ruel used his avatar ability Cunningham would be starting with only four cards – and a second-turn Meddling Mage made that an effective three. His Cabal Therapy successfully hit Vindicate but he was still on a swift clock with no on-board action as all cards costing less than five had been effectively neutralized. There was little that Jeff could do.

His Teysa avatar made it look like Jeff might have a chance to climb back into the game when Ruel started using Voidmage Prodigy to counter spells, giving Jeff several chump blockers, but the second ability of the Ink-Eyes avatar gave Ruel a steady stream of creatures and they carried the first game. It was clear that Ruel had robbed his fellow competitors blind at the start of the auction.

Ruel took Llanowar Elves with Ink-Eyes to start Game 2 and quickly reanimated it with Ink-Eyes' second ability. Ruel spent his entire hand to slow down his opponent's mana and get good old Bob Maher into play. This was fortunate for Ruel, as Jeff was then forced to burn his Cabal Therapy in order to kill off his Wirewood Herald and profit a 1/1 Spirit token.

Ruel was generating card advantage, but requests that the Dark Confidant be gentle were denied and he took away six life over his first two turns. Only Jon "Shadowmage Infiltrator" Finkel could profitably block anything and every potential spirit token was starting to look deadly. Finkel was sent off in search of something useful, finding Sensei's Divining Top. Bob was now tamed but could he stabilize the board without dying? There were only four life left to play with. 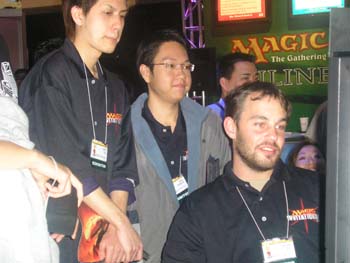 A crowd gathered around Antoine as he closed in on victory.

Jeff would certainly send all his creatures in, knowing that blocking would generate many spirit tokens and that Ruel would have to go down to one. Antoine made one last attempt to find something, but there was nothing that could save him and the match moved to a Game 3 that would decide the winner of the 2006 Magic Invitational.

Ruel started out by taking and reanimating Cunningham's Elves of Deep Shadow, turning Cunningham's fast mana against him to Vindicate his first land on turn two. Ruel followed up by playing a Dark Confidant followed by Umezawa's Jitte, and then represented a Counterspell for Cunningham's Nantuko Husk.

That caused Jeff to pause, considering whether he should play it or hold it back, shaking his head knowing what he was in for. He finally decided he had no choice, but the Counterspell was not a bluff and the Husk was sent to the graveyard.

Ruel found a land, used Recoil to remove his opponent's lone blocker and began building up counters on his Umezawa's Jitte. Ruel's advantage continued to snowball from there, and there was no way for Jeff's deck to catch up.

Powered by a deck designed by a former Invitationalist winner and crafted around cards created by other winners, Antoine Ruel earned the title of the 2006 Magic Invitational champion!