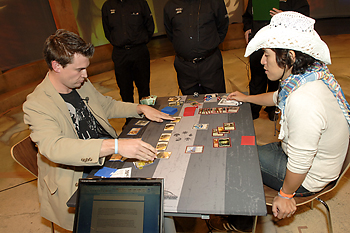 Brian Kibler and Tsuyoshi Ikeda bring broad smiles and classy styles to the PT Finals scene.Pro Tour–Austin was a bang-up Pro Tour, and its thrilling conclusion was literally a Hall of Fame match-up. Both Tsuyoshi Ikeda of Japan and Brian Kibler of America were long-time pros with considerable successes. Ikeda entered the match with a Grand Prix victory under his belt for the season, taking down Niigata, while Kibler had Top 8ed the last Pro Tour in Honolulu. They were already impressive Hall of Fame ballot contenders, and a win for either player meant becoming an even better prospect for the 2010 vote.

Tsuyoshi Ikeda opened on a first-turn Wild Nacatl, but with only a basic Forest, it was a lowly 1/1. When he sacrificed Marsh Flats the following turn to find Sacred Foundry, the Cat became a fully powered 3/3. Ikeda had a second Cat in the form of Qasali Pridemage, but when he attacked with his Nacatl his opponent let the exalted trigger hit the stack and cast Lightning Bolt to destroy the 3/3.

Tarmogoyf from the American entered the battlefield as a 3/4, and looked to hold the fort down against Ikeda’s forces. That wasn’t to be, however, as the Japanese player cast Path to Exile to annihilate the blocker and rumbled in for 3 with his Pridemage. Post-combat, he had a Kird Ape before shipping the turn. Kibler, whose deck had the benefit of playing large threats like Baneslayer Angel to take advantage of the fact he had gotten a free land from Path, spent his turn on a land and a Knight of the Reliquary. The Conflux rare entered the battlefield as a 4/4 thanks to two fetch lands in Kibler’s graveyard.

A second Path to Exile from Ikeda handled that monstrous threat as well, but Tsuyoshi had no additional creatures, and simply attacked his opponent to 11. Kibler untapped and cast Elspeth, Knight Errant, making a Soldier, then Tarmogoyf number two. Shockingly, Ikeda had a third Path to Exile, which he used on the Tarmogoyf, and Kibler smiled, unable to search up a land thanks to having already gotten all of his basics out with the first two Paths.

Ikeda cast a Umezawa’s Jitte, then a turn later equipped it to his Kird Ape and sent both of his attackers to the red zone. Kibler used a Lightning Helix to kill the Ape, then took 2 damage from Qasali Pridemage. He continued building up an army of Soldier tokens, and added a Tarmogoyf to the battlefield. Ikeda had tried in earnest from the get-go, but things weren’t looking good for the first game of the match. He equipped his Umezawa’s Jitte to Qasali Pridemage, and attacked Brian. Tarmogoyf ate the Cat, and Ikeda used a Umezawa’s Jitte counter to finish off his opponent’s ‘Goyf.

Brian attacked Ikeda with his twin Soldier tokens before making another, and Elspeth grew to six loyalty counters. Would Brian Kibler be able to use the ultimate ability on his planeswalker in the first game of the Finals? Ikeda drew but had nothing to help, and took 3 when Brian attacked with a triple set of Soldiers. Kibler then made a fourth and passed, but Ikeda killed the untapped Soldier with a Lightning Helix. 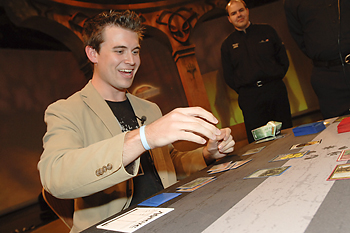 Smiles.The Japanese player needed some help to crawl back into the game. He found a Kird Ape and cast it, equipping Umezawa’s Jitte to the 2/3. That forced Brian to consider all of his options on his own turn. He decided to use a Path to Exile of his own on his opponent’s Kird Ape, then attacked with his team, losing one Soldier to a Umezawa’s Jitte activation. Post-combat the American had Wild Nacatl, with Elspeth hitting the full eight loyalty counters after making a replacement Soldier.

Thanks to his opponent’s help, Tsuyoshi Ikeda had managed to get the third white he needed for Spectral Procession, finding three tokens of his own to keep up with his opponent’s Elspeth. Ikeda passed the turn on a wing and a prayer, but Brian’s raised eyebrows on his draw step practically blurted out the card that had been waiting for him: Punishing Fire. With a plethora of lands on the board, including multiple Grove of the Burnwillows, Brian machine-gunned his opponent’s tokens, then attacked for 6 damage.

A second Spectral Procession for Tsuyoshi yielded him three more Spirit tokens, and he tapped out to equip one with Umezawa’s Jitte. Brian untapped, then used Punishing Fire to kill two of the tokens, including the one that had been equipped. He rumbled into the red zone, but Tsuyoshi opted not to block, taking the damage. Kibler made a fifth Soldier and passed. Ikeda equipped his lone Spirit, attacked, but had his effort to get Umezawa’s Jitte going destroyed by a Path to Exile on the 1/1 from his opponent. Out of options, the Japanese standout conceded.

The two players shuffled for their second game, with Kibler joking about how many sleeves he had broken on the weekend. As if on cue, he split a sleeve right down the middle and had to replace it.

They gripped their openers, but Brian had to send his back for six. He laid out his cards to begin shuffling again, and immediately broke another sleeve. Both players gave surprised laughs; Kibler had been breaking an inordinate amount of sleeves during the Top 8. 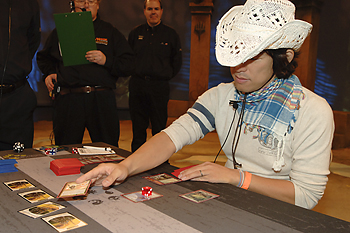 “Style.”The president of that sleeve company is a friend of mine,” Ikeda pointed out, before keeping his opener.

Noble Hierarch was first on the battlefield for Kibler, but the 0/1 met a fiery fate at the hands of Lightning Bolt from Ikeda. Brian simply tried again, mustering a Tarmogoyf that was 3/4 thanks to his opponent’s removal spell and a Marsh Flats. Ikeda cast Wild Nacatl, but chose not to block when his opponent attacked him the following turn. Post-combat, Kibler had a 4/4 Knight of the Reliquary, and it looked like Ikeda was going to need to find a Path to Exile or two in order to stay in the game.

Ikeda played Arid Mesa, then went deep into the tank to figure out his next course of action. Surprisingly, the play he came up with was ... passing the turn? He did exactly that, falling to 8 when his opponent used Lightning Bolt to destroy Wild Nacatl and managed to get through for 7. His hand forced, Ikeda sacrificed a Misty Rainforest for Temple Garden and Arid Mesa for Sacred Foundry, falling to 6.

His draw step failed to yield the third source of white or the fourth land he needed to cast Spectral Procession, and Ikeda was forced to use a Lightning Helix defensively to blow up Qasali Pridemage when Kibler sent his team into the red zone the following turn. That put Tsuyoshi back to 8, but the Knight and Tarmogoyf dropped the Japanese player low enough for Brian to use Punishing Fire to finish the deed.

It was Tsuyoshi Ikeda’s turn to mulligan for the third game, but after he put his hand on top of his deck he waited to see if his opponent would do the same. Kibler obliged almost immediately.

Both were happy with their next draw, but it was Kibler who had the only action on the first turn: he cast Noble Hierarch to help accelerate his start. Ikeda took a long time on his second turn, despite ultimately only playing a land and passing. It seemed he was looking to figure out either whether he should kill his opponent’s Noble Hierarch, or what was going to happen to the game because he wasn’t able to kill it.

In any case, Kibler cast Knight of the Reliquary as a 3/3. The play was a tad dangerous as it opened up his sizable fatty to the possibility of being killed by Lighting Bolt or Helix. Because the Zoo mirror can often come down to whoever can keep the largest fatty on the battlefield longest, opening one of his up to being so easily disposed of was risky. Still, Kibler didn’t earn his Hall of Fame eligibility for nothing. Ikeda, echoing that sentiment, cast his own Knight which trumped Brian’s, 4/4 to 3/3.

The battlefield became a veritable round table after Kibler missed a land drop but cast a second Knight. His opponent tried to cast Countryside Crusher, but Brian dutifully pointed out that Tsuyoshi didn’t have access to two red. Instead, Ikeda cast Kird Ape, though he did have an Arid Mesa he could activate to find the second source of red. 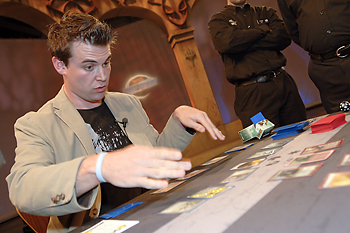 ... Okay, that might be the Macarena.Brian’s first Knight cashed in a Plains at the end of Ikeda’s turn to find an Arid Mesa, which he then cashed in for Temple Garden. That made his Knights each 5/5, and with two of them active he could begin pumping them at a clip of +4/+4 each turn if he wanted. While the American was tapped out, Ikeda cashed in a fetch land of his own for a Mountain so that he could Lightning Bolt Brian’s Noble Hierarch.

Kibler untapped and played Grove of the Burnwillows. He tapped all of his mana, then activated a Knight to cash in a Stomping Ground for Sacred Foundry. That gave him an additional mana, with which he used to cast Elspeth, Knight-Errant. The plucky planeswalker tossed a Soldier onto the battlefield to protect herself from Ikeda’s attackers, and Brian handed things back to his opponent. Ikdea used the end of turn to Reliquary a Sacred Foundry into Misty Rainforest, then that land into Temple Garden. He needed a big turn to escape the game with a W.

Slowly, Tsuyoshi peeled the top card of his library, dragging it across the board to his hand. He calmly flipped through his cards, then cast the Countryside Crusher he had tried to cast illegally just one turn prior. Brian paused things to possibly respond, but opted to let the Crusher hit the battlefield. That was all Ikeda had, passing the turn back to Kibler.

Brian used Elspeth to give one of his Knights a free Angelic Blessing, then cast Tarmogoyf and Wild Nacatl. Countryside Crusher revealed zero lands but gave Ikeda a Lightning Bolt. He cast Spectral Procession to start blocking, and when Kibler Elspethed his Wild Nacatl to get in for 6, Ikeda proceeded with plan chump-block. The second time the Countryside Crusher triggered, it milled a single land and gave Ikeda a Kird Ape. He played the 2/3, and passed the turn.

Kibler used Punishing Fire to blow up one of the remaining 1/1 Spirit tokens, leaving only a single copy on the board. With Grove of the Burnwillows untapped and Ikeda at just 5 life, the end was apparent. Kibler would tap his Grove, give Ikeda a life, buyback Fire from the graveyard, kill the last flying blocker on his own turn, jump his Knight of the Reliquary, and attack for the win. Knowing how it would all play out, Tsuyoshi gave a defeated smile and extended a congratulatory hand to his opponent. 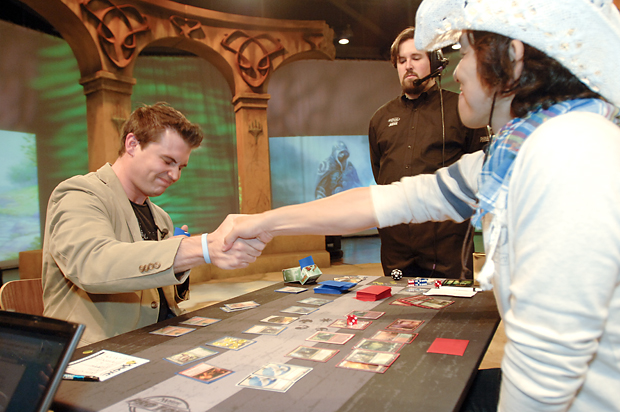 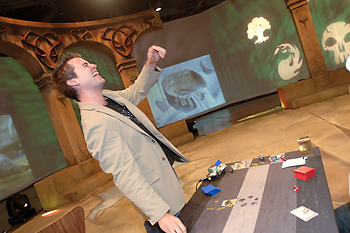 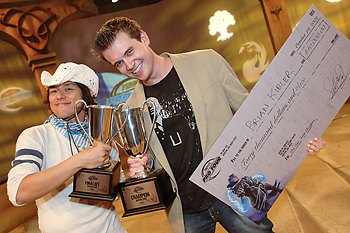 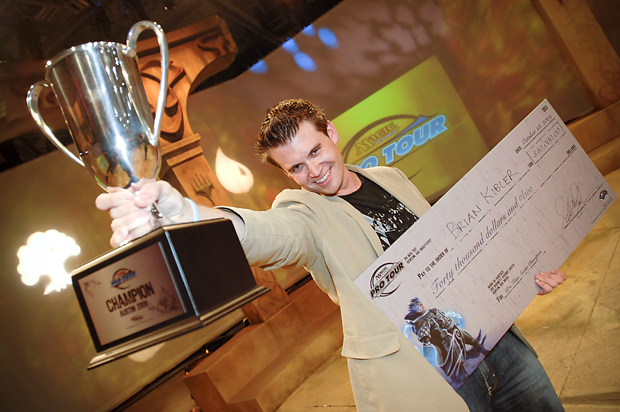