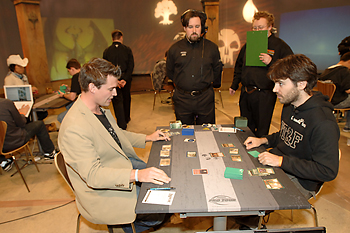 Brian Kibler and Evangelos Papatsarouchas rock the Semifinals.”I haven’t seen anything on the coverage about my song!” – Brian Kibler

As is now traditional for Brian Kibler, he’s selected a song for this Pro Tour to help carry him through the event. Before every match he blasts it through his earphones, helping him to focus on the task at hand. This time around the avowed trance fan has been enjoying “Off the World” by Lange, and apparently benefiting immensely. Armin van Buren was unavailable for comment.

Greece’s Evangelos Papatsarouchas had no such pre-match routine. He simply shuffled up and enjoyed some light conversation with Kibler before the headphones went in and he was oblivious to the world. These two had clashed in Round 15 yesterday, with Kibler losing two games to his own play errors. Papatsarouchas’s Hypergenesis deck isn’t forgiving of such mistakes. Of course, post-sideboard, Kibler’s Rubin Zoo has a disruptive package that could make all the difference in a five-game series.

Kibler won the roll and led off with Wild Nacatl. He passed it over to Papatsarouchas.

“Am I dead yet?” asked Kibler.

“Wild Nacatl gets to attack?! Yes!”

Papatsarouchas played a land and watched Kibler beat in for 3 and add a second Nacatl. After that, though, he was done waiting. Tendo Ice Bridge and a Spirit Guide enabled Violent Outburst into Hypergenesis. Down came Bogardan Hellkite and Angel of Despair. Kibler laid down a third Nacatl to feed the Angel and took 5 from the Hellkite.

Kibler swung in with both Nacatls, and Papatsarouchas took 6. Lightning Bolt and Punishing Fire took care of the Angel (buying back the Fire with Grove of the Burnwillows). Papatsarouchas wasn’t done with fatties, however. He gave Kibler a Spirit with Exotic Orchard and dropped Ardent Plea for a second Hypergenesis. A freshly drawn Angel of Despair took down another Cat, leaving Kibler with a lone attacker. He gamely swung in. 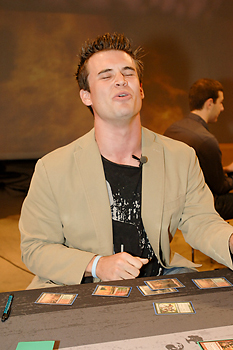 No one is really this animated; Brian Kibler is actually brought to life by a team of six puppeteers.Papatsarouchas attacked with both his monsters, but Kibler had Lightning Helix to go with Punishing Fire, dispatching the Angel. After cracking a fetch land, he was down to 2.

“I would love a Baneslayer Angel right now,” said Kibler.

Sadly, no one answered his prayers.

While sideboarding, the two players talked about their paths to the Top 8, including Kibler’s disastrous 0-3 draft on Day 2 and the design of their respective decks. Kibler’s was largely the brainchild of Hall of Famer Ben Rubin, grown out of a desire to have a competitive deck that could take advantage of Blood Moon. Papatsarouchas, meanwhile, had tweaked his Hypergenesis deck to be able to give up fewer games to cards like Path to Exile, including things like Progenitus and Akroma, Angel of Fury, as showcased in his Round 15 match against Kibler.

Both players went down to six cards for Game 2, and then Kibler continued to five.

“You can’t keep hands without your hate cards, I guess,” said Kibler.

“Oh, I know. Those would’ve been snap keeps against a lot of decks. Not yours.”

“That doesn’t bode well,” said Kibler. “Am I dead turn one?” 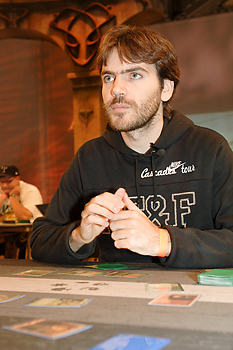 Kibler set him back with Ghost Quarter on Gemstone Caverns, but Papatsarouchas replaced it with Fungal Reaches. Next up was Wild Nacatl, and after an Exotic Orchard, Kibler boosted it to 3/3 with a Mountain and played a twin.

All Papatsarouchas had was a second Fungal Reaches, still needing a second colored mana before he could get Hypergenesis. Kibler hit again and looked to lock the game up with Blood Moon. Papatsarouchas had to respond, pitching Spirit Guide to cast Violent Outburst, his lackluster Hypergenesis being a lone Bogardan Hellkite. Kibler added a Qasali Pridemage to the board just long enough to join a Nacatl in death.

It was still anyone’s game—that is, until Papatsarouchas flashed a Firespout, further shortening the list of Kibler’s outs.

Both players kept their starting seven, and again Papatsarouchas had the Gemstone Cavers, this time pitching Ardent Plea. Kibler turned a Marsh Flats into Temple Garden for Noble Hierarch. Papatsarouchas played a Reflecting Pool, but without a Spirit Guide had to pass the turn. That was all the leeway Kibler needed to bust out Blood Moon.

He started to swing for 1 with his Noble Hierarch while they both made basic Mountains. Eventually he drew Wild Nacatl and played it with his Hierarch. Papatsarouchas was getting dangerously close to Bogardan Hellkite mana. Kibler wasted no time using Path to Exile on his Cat to search up basic Plains. Combined with the Hierarch, that meant he could bust out Baneslayer Angel.

Papatsarouchas was a turn too late with his eighth land, his Hellkite killing the Hierarch and dealing four. A turn earlier would’ve made all the difference. Kibler made it worse with a Path to Exile, and even a second Hellkite couldn’t keep up with Baneslayer.

“I have to win two with you going first?” said Kibler. “C’mon, Noble Hierarch!”

“I only have three. It’s kind of embarrassing.” 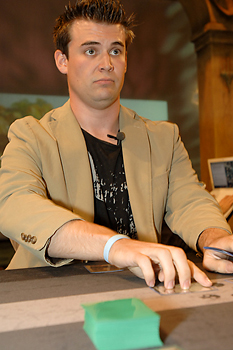 ... while Kibler shows off his.They shuffled up quickly.

“Good luck, but not TOO good,” said Kibler with a smile.

Papatsarouchas looked at his hand before mulliganing. “Yeah, not too good.”

Kibler decided to join him in six. Papatsarouchas led with Gemstone Mine, and Kibler wasted no time binning it with Ghost Quarter. Unfortunately for Papatsarouchas, the Greek had no second land.

Kibler slowly played his hand out—First Noble Hierarch, then Qasali Pridemage—while Papatsarouchas began to discard. Next stop was Blood Moon, and then Knight of the Reliquary. Papatsarouchas saw no need to keep going.

Kibler, meanwhile, had played Grove of the Burnwillows and Noble Hierarch, and then a Forest for a second Hierarch. Papatsarouchas played his fifth land of the match and cast Demonic Dread. Hypergenesis allowed him Progenitus and Angel of Despair. Kibler had a meaty grip as well, putting down Meddling Mage naming Firespout, another naming Putrefy, and a third just in case. Naturally, Papatsarouchas was holding both.

Kibler untapped and slammed down Baneslayer Angel. His pair of Hierarchs meant it represented a drain of 7 a turn. Papatsarouchas hit with Progenitus, still ahead in the race thanks to his Angel sitting in the way, but then Kibler showed him Path to Exile. They traded blows, but lifelink kept Kibler out of reach. After uncooperative draws, Papatsarouchas extended the hand.

Brian Kibler defeats Evangelos Papatsarouchas 3-2 and advances to the Semifinals!

After the match, the players realised that both of them had missed the trigger on his Angel of Despair, which is not a “may” ability. So Papatsarouchas could have destroyed a Meddling Mage to free up one of his spells, or a Noble Hierarch to prevent the Baneslayer hitting play. Either of these would have given him the game, and the match.