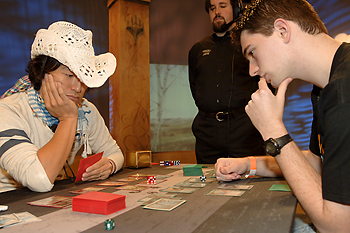 suyoshi Ikeda and Paulo Vitor Damo da Rosa are no strangers to the Pro Tour. This is Paulo's fifth Pro Tour Top 8, putting him in a prime position to make a bid for the Hall of Fame when he becomes eligible in 2012. Tsuyoshi has played in over 50 Pro Tours(!) and has 269 lifetime Pro Points before this tournament. The only players with more lifetime Pro Points than Tsuyoshi who have not yet been elected to the Hall of Fame are fellow Japanese players Tomoharu Saito and Shuhei Nakamura (who are virtual locks for first ballot inductions when they become eligible in 2010 and 2011 respectively) and longtime Dutch pro Bram Snepvangers.

Before the match, both of these seasoned veterans thought that they were sizable underdogs. Paulo was worried about Tsuyoshi's quick threats, combined with his Qasali Pridemages (to deal with Engineered Explosives and Chalice of the Void), Path to Exiles and Spectral Processions Game 1—followed by his Otherworldly Journeys and Ghost Quarters for subsequent games—would stop him from being able to strike in for 20 damage with a menacing Marit Lage token.

Tsuyoshi, on the other hand, was worried that Paulo's potential for explosive starts, disruption, and devastating artifacts would make short work of him.

Paulo won the roll, but Tsuyoshi made the first play of the game with a Kird Ape. Tsuyoshi cast a Qasali Pridemage on turn two, while Paulo Repealed the Kird Ape to stay at a healthy 20 life. On his third turn, Paulo, who was clearly in need of some mana, imprinted Beseech the Queen on Chrome Mox and Repealed the Qasali Pridemage. Tsuyoshi simply recast his two creatures and passed the turn back to Paulo.

Paulo made a Dark Depths and a Vampire Hexmage, with two blue mana untapped to go with his Muddle the Mixture and Engineered Explosives that were sitting in his hand. Tsuyoshi had a Spectral Procession to try to stay alive, but Paulo's Engineered Explosives cleared a path for his freshly made 20/20 and take Game 1. 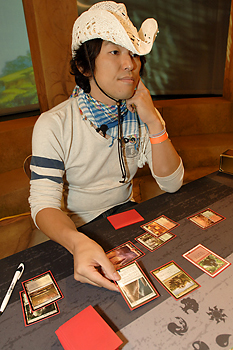 Ikeda shows off the reason they call it Spectral Zoo.

Paulo had a Muddle the Mixture to fetch Doom Blade to clear the way for a Vampire Hexmage attack that knocked Tsuyoshi down to 4, but a Spectral Procession put Paulo, who was on 4 at this point, on a very quick clock.

An attack with the Vampire Hexmage prompted Tsuyoshi to block with a Spirit token to stay on 4. Tsuyoshi then attacked with his two remaining tokens, taking Paulo to 2 and threatening to kill him on the very next turn ...

... Until Paulo drew a Dark Depths! Tsuyoshi drew a blank and passed the turn, and Paulo brought the wrath of Marit Lage to the battlefield. On his next turn Paulo drew and immediately used an Engineered Explosives to clear the way for his 20/20 and move to a 2-0 lead in the match.

Had Tsuyoshi sacrificed one fewer fetch land during the course of the game he would not have had to chump-block the Vampire Hexmage with a Spectral Procession token to stay alive. If Tsuyoshi had still had three Spirit tokens after the Hexmage attack, he would have been able to attack for lethal damage past Paulo's 20/20 before Paulo was able to draw the Engineered Explosives he needed to close out the game.

Tsuyoshi played a third land and a Qasali Pridemage, attacked with the Tarmogoyf, and decided not to blow up the Chrome Mox. Paulo made a Vampire Hexmage leaving Tsuyoshi with no choice but to destroy Paulo's Chrome Mox at the end of his turn so that Paulo would not be able to Muddle the Mixture his Spectral Procession.

On his following turn, Tsuyoshi resolved a second Spectral Procession, then attacked with his three Spirit tokens and his Tarmogoyf. Paulo blocked the Tarmogoyf with his 20/20 and took 3 to fall down to 10. A third Spectral Procession got countered by Muddle the Mixture, with Paulo taking a damage from his Underground River in the process, and an attack with four spirit tokens knocked Paulo down to 6.

An attack and a Lightning Helix later, and the players were off to Game 4. 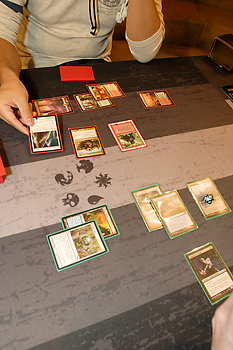 What's better than three 1/1 flyers? We're going to go with one 20/20 indestructible flyer on this one.

Paulo played an Underground River into a Thoughtseize falling to 17 and taking a Knight of the Reliquary, leaving Tsuyoshi with a Countryside Crusher, a Wild Nacatl, a Lighting Helix, and two lands.

"Ahh, you want a slow game," said Tsuyoshi with a smile, knowing that his Knight of the Reliquary would have allowed him to fetch a potentially devastating Ghost Quarter.

A Repeal bought Paulo some time, but Paulo had to tutor for both his Dark Depths and his Vampire Hexmage on subsequent turns. This gave Tsuyoshi plenty of time to attack with his Wild Nacatls and Countryside Crusher to knock Paulo down to a dangerously low 7 life.

When Paulo finally did assemble his combo, Tsuyoshi was ready with a Path to Exile to even the score up at two games apiece and send their match to a make or break fifth game.

Paulo agonized over his opening seven before finally deciding to mulligan. His six-card hand was no better, and he had to dip down to five. 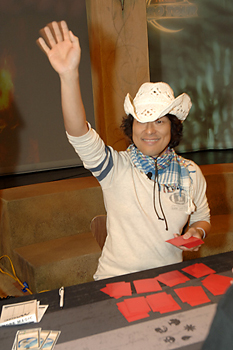 Despite mulliganing to five, Paulo started off strong with a Chalice of the Void for one to stop any Path to Exiles or Wild Nacatls and a Threads of Disloyalty to take Tsuyoshi's Tarmogoyf. On his third turn Tsuyoshi cast a Countryside Crusher, while Paulo spent his turn transmuting a Muddle the Mixture for a Vampire Hexmage.

A Knight of the Reliquary with two lands in the graveyard put a lot of pressure on Paulo, who knew that Tsuyoshi could fetch a Ghost Quarter as soon as his creature recovered from summoning sickness. But he simply didn't have anything and was forced to pass the turn.

Tsuyoshi, clearly respecting Paulo's sideboarded Damnations, passed his turn without making a play. A transmuted Muddle the Mixture found a Doom Blade, which Paulo used to destroy Countryside Crusher while Tsuyoshi's Knight of the Reliquary was busy finding a Ghost Quarter.

A Repeal bounced Knight of the Reliquary prompting Tsuyoshi to recast his Knight along with a fresh Qasali Pridemage. These plays left Tsuyoshi with only a Ghost Quarter for available mana and when Paulo made and activated an Engineered Explosives for two, Tsuyoshi had to decide whether or not he wanted to tap his Ghost Quarter to activate his Qasali Pridemage.

Tsuyoshi decided to blow up the Chalice, and when Paulo's Vampire Hexmage and Dark Depths teamed up to make a 20/20, Tsuyoshi was able to casually get rid of it with a Path to Exile.

A Slaughter Pact dealt with Knight of the Reliquary, but a Tarmogoyf and a Spectral Procession were more than enough to send Tsuyoshi on to the Semifinals.